Dutch minister Melanie Schultz van Haegen of Infrastructure and the environment and chairman Nguyen Van Trinh of the People's committee of the province of Ba Ria Vung Tau, signed a grant agreement for the construction of a new waste water treatment plant (wwtp) and a connecting sewage system in the city of Phu My.

The wwtp and connecting sewer will treat both the municipal wastewater of 174,000 people, as well as industrial wastewater.

The agreement was signed in Hanoi, Vietnam on 30 March on the occasion of the 5th meeting of the Intergovernmental committee on climate change adaptation and water management. 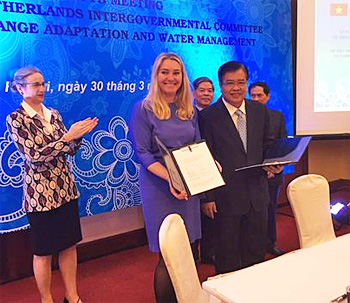 The talks focused on the progress of the cooperation in the areas of water management and climate adaptation.

In addition, the Dutch minister talked with the People’s Committees of three provinces regarding the progress of three other projects in Vietnam in the fields of water supplies and water treatment.

These three projects, including the new wwtp for Phu My city, involve Dutch government aid to the amount of 25 million euros. 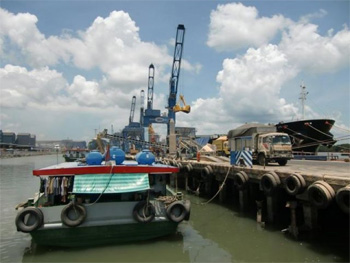 The harbour of Phu My boosts the economical development of the city.

Rapid urban development
The province of Ba Ria Vung Tau and Phu My city in particular is rapidly developing with new residential areas, industrial zones and sea ports. It is difficult for sewerage and wastewater treatment infrastructures to keep up with such developments.

With the population of approximately 174,000 people, presently, no domestic wastewater discharged in Phu My is being treated. This is causing severe water pollution in the area.

Thus, construction of a complete wastewater collection, treatment and drainage system for Phu My is of highest necessity and priority for future socio-economic development of the province. 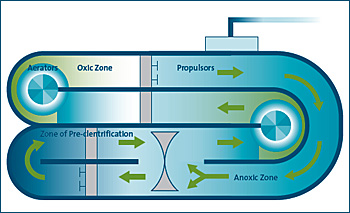 Scheme of the Carrousel waste water treatment technology with its typical shaped oxidation ditch, shaped as a looped channel

Carrousel technology has proven a cost-effective, reliable and highly efficient method for the biological treatment of municipal and industrial wastewater. Its clear advantage is the continuous biological process of BOD removal and simultaneous nitrification and de-nitrification in a single reactor with only limited equipment required.

Over 1,200 Carrousel systems have already been successfully implemented world-wide, with treatment capacities ranging from as little as a thousand to as high as ten million population equivalent.

The project is co-financed by the Dutch government with a grant of 35 percent of the total project value, that amounts to 12 million euro in three phases (development, implementation and O&M Phases).

Over the past five years, the project plan and its design have been prepared and approved by both the Dutch and Vietnamese government.

Construction is expected to start in mid-2017 and the project's completion is planned for 2019.

Ministry of Infrastructure and the Environment
The Hague, the Netherlands
+31 70 456 00 00
www.government.nl/issues/water-management