The plan combines a small ring-dike around the city centre and floodable outlying areas.

The city is confronted with floods every year during the rainy season. Causes of the flooding are complex and include flood tide, heavy rainfall, high discharges of upstream rivers, insufficient capacity of the drainage system, low ground elevations of the city and land subsidence, spatial planning, policies and regulations, lack of public awareness and participation.

Local authorities originally proposed building a 172-kilometre ring-dike with twelve flood gates. Although the Dutch companies' alternative plan is considerably less expensive, it also provides an adequate response to the heavy rainfall in the region.

Controlled flooding
The concept is that the city itself will be protected by dikes but controlled flooding will be permitted in outlying areas. In the first instance, a small ring-dike will be constructed around the city centre to provide adequate flood defences until 2025. It will then be possible to extend and raise this barrier if sea levels continue to rise. 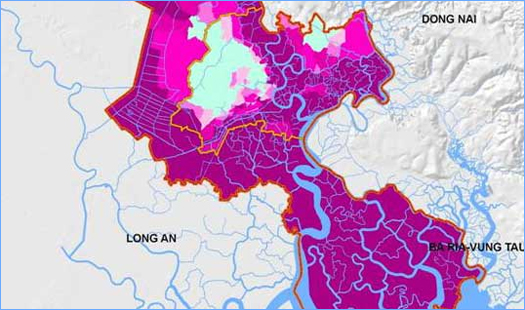 Spatial interventions
As Frits Dirks, project manager for Royal HaskoningDHV, explains: "The city has to contend with rising sea levels, soil compaction and subsidence of two to three centimetres a year. There is also particularly heavy rainfall. At certain times, water must be allowed to flow off into flood basins, which means that certain spatial interventions are required. Based on various flood scenarios, we have helped the local authority to determine where the water catchment areas should be located. Our strategy is therefore one of 'multilayered' protection, as applied in the Netherlands under the national Room for the River programme."

Dikes and catchment areas
The financial implications of flooding are far more serious in the case of residential or business districts. "In the original plans, little or no thought had been given to the economic impact of flooding," Dirks continues. "It will be cost-efficient from the outset to protect certain busy and important areas with dikes. In less densely populated areas, flood plains offer an adequate solution, or additional dredging to increase the capacity of the waterways themselves.

Computer simulations
Royal HaskoningDHV and Deltares have used computer simulations to forecast the likely rise in the sea level caused by climate change. Three scenarios could then be produced: for 2025 (which assumes a 17-centimetre rise), 2050 (25 centimetres) and 2100 (75 centimetres). The prognoses formed the basis of the proposal for a flood defence system which is both smaller and less expensive than that envisaged by the Vietnamese authorities. If the actual rise in the sea level is faster or slower than projected, the Dutch plan can be adapted accordingly.

This news item was originally published on the website of Royal HaskoningDHV and Deltares.