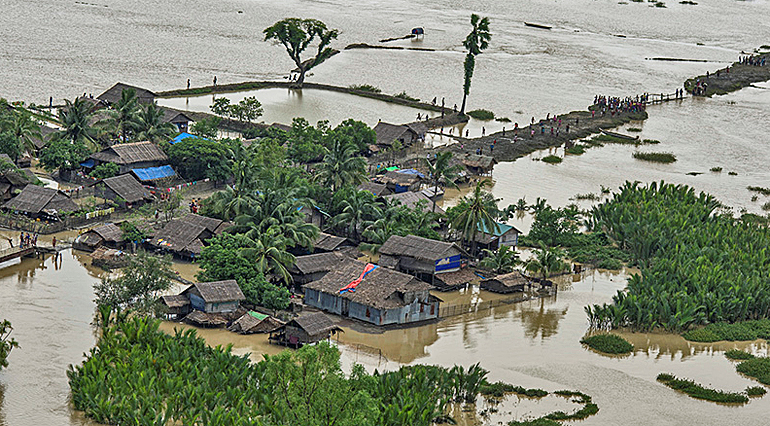 The Netherlands has offered to send a team of water experts to help Myanmar finding solutions that make the country more resilient to water problems. The country was recently hit by severe floods and landslides.

The latest UN-report of 8 August mentions 96 deaths and 61,000 displaced household.

In a joint letter sent to the Myanmar government, Dutch ministers Melanie Schultz van Haegen (infrastructure and environment) and Lilianne Ploumen (development cooperation) announced that experts from the Dutch Risk Reduction (DRR) Team are ready to go when needed. 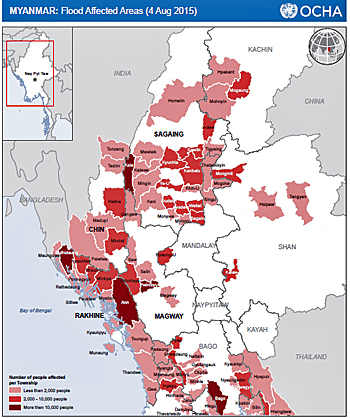 The Western part of Myanmar was worst hit with regions reported to have over 10.000 people affected per township (dark red).

More than one million people urgently need aid and the material damage is considerable. A state of emergency has been declared in four regions.

The Netherlands is already contributing to the relief efforts by organisations on the spot in Myanmar, including the UN and the Red Cross.

Minister Ploumen commented that the need is acute: "There is tremendous devastation and large numbers of people have been made homeless. More rain is expected, so it is vital to not only help the victims and provide for their immediate needs, but also to prevent even greater suffering."

Finding structural solutions
As a delta country, Myanmar is highly vulnerable to flooding, and has been badly hit in recent years. "I have seen with my own eyes how Myanmar has struggled to cope with repeated floods", said minister Schultz van Haegen. "By deploying the Dutch Risk Reduction Team, we can help to find structural solutions to make the country more resilient to water problems."

The Dutch Risk Disaster Team is a joint initiative by the two ministers and consists of Dutch experts from the business community, knowledge institutions, NGOs and government, who can be deployed at short notice in cases of flooding, drought and water pollution. The DRR team focuses on reconstruction and prevention, not on emergency aid. 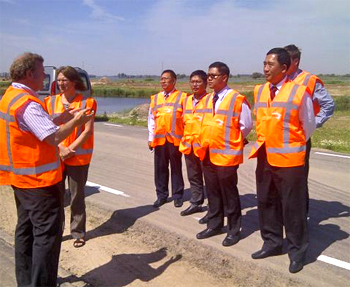 As part of the Dutch-Myanmar water cooperation programme a high-level delegation from Myanmar visited the Room for the River project in the Netherlands earlier this year.

Dutch-Myanmar water cooperation programme
The offer to deploy a DRR team ties in with the ongoing partnership between the Netherlands and Myanmar in the field of water. The Dutch government has earmarked 3 million euro for water cooperation with Myanmar between 2015 and 2017.

In the week of 16 August, a delegation from the high level expert team will be visiting Myanmar for talks with the authorities there about follow-up partnership activities, including the possibility of deploying the DRR team.