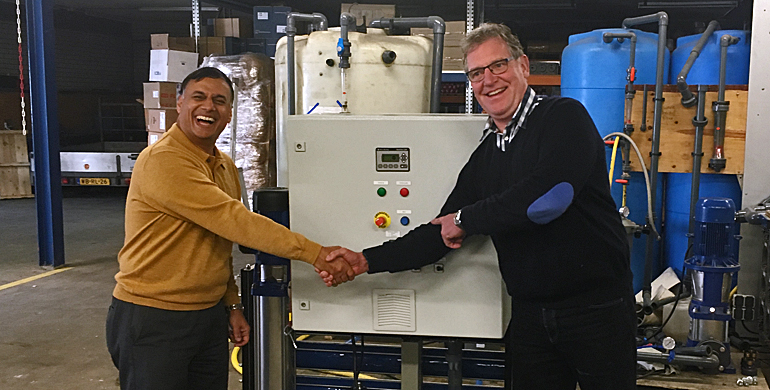 Dutch Water Partners launched a new compact WaterGuard ROM4 reversed osmosis unit with a capacity of 1000 and 1600 liters per hours.

This unit has specially been developed in cooperation with the US-based company WaterHealth that builds and operates many water centres in India, Bangladesh, Nigeria, Liberia and Ghana for the supply of drinking water to communities in underserved areas with a population ranging from 5,000 to 20,000.

DWP and WaterHealth participate in a public-private partnership Ghana Wash Window, granted by the Dutch government, for the construction of 85 water centres in Ghana that are to be equipped with WaterGuard purification units, BucoTank water storage tanks and some FlexBuild prefab buildings. 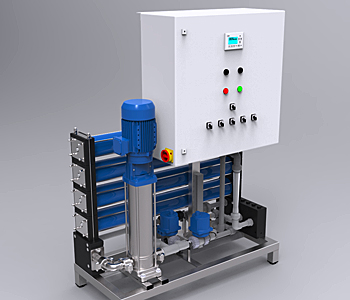 More robust and less energy
According to Peter Bulsing the development of the new WaterGuard unit was triggered by WaterHealth.

This company has already built over 500 water centres in the world, mainly in India, using UV- and reversed osmose filters to produce drinking water from local sources, such as surface water, river water, borehole water or lake water.

WaterHealth was looking for a more energy efficient and more robust RO-unit so DWP developed a customized version of its existing series of standardized WaterGuard purification systems.

The WaterGuard ROM4 combines its typical high recovery rate of 70 percent with a low nominal power of 1.5 kW.

Specially for WaterHealth the new model has an automatic control function so the pH-dosing, EC, flow and pressure measurements can be monitored from WaterHealth's and DWP's central offices, such as in Accra in Ghana.

User friendly
"A lot of water supply projects in developing countries are models of technological innovations", explains Peter Bulsing. "But, ironically enough they are unsuccessful for that reason as they are often too complicated for the local communities."

DWP therefore kept its standardized WaterGuard system effective and practical. According to Bulsing this matches the philosophy of the water centres that WaterHealth builds around the world.

"Our systems are straightforward to maintain and user friendly. They are inexpensive and easily for the local communities to install, expand or even move to a different location", he adds. 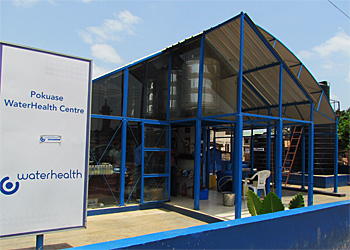 One of the standarised centres that WaterHealth has already built in Pokuase, a suburb of Accra, capital city of Ghana.

Gradually take over by local communities
Under the Ghana Wash Window programme, the Dutch government granted WaterHealth and DWP to set up 85 community water centres.

Of these centres, 25 will be built in the Kingdom of Ashanti, a large autonomous region in the hearth of Ghana.

Partners in this project are Dutch Water Partners (DWP) for the delivery of the water filter systems and storage tanks, Global Women Development Partners (Glowdep) for the skill training of women to operate the centres and the Ghana ministry of local government & rural development.

WaterHealth will built the centres and operate them for five years with the intention of a gradually take over of control and ownership by the local community.

The goal of the Dutch granted project is to provide safe drinking water for over 650,000 people in various communities of Ghana and educate/sensitize the communities on water, sanitation and hygiene (WASH) practices.

This news item was originally published on the website of Dutch Water Partners.