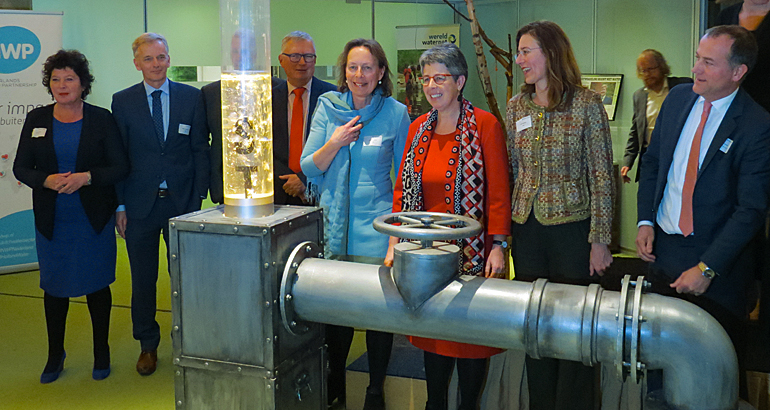 The programme to achieve this goal, WaterWorX, was launched at the national celebration of World Water Day in The Hague, the Netherlands on 22 March.

In this programme the Dutch water supply companies will set up Water Operational Partnerships (WOPs) with water utilities in Africa, Asia and Latin-America to support them in reducing non-revenue water and improve the financial and administrative systems. 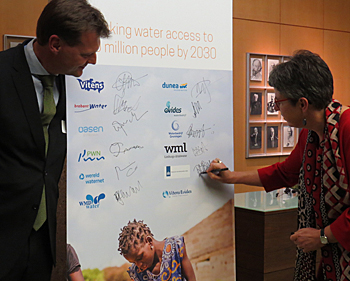 Reina Buijs signs the agreement as participant of the WaterWorX programme on behalf of the Dutch government.

Less dependent on aid
The programme is supported by the Dutch government and its first stage is budgeted at 54 million euro of which 55 percent is co-funded by the Dutch Ministry of Foreign Affairs and 45 percent by the Dutch and local water utilities.

As a partner of the WaterWorX programme, the ministry will provide strong support in the field of local policy, laws and regulations in which local water utilities are encouraged to function properly. This will enable them to attract long term investments, making them financially less dependent on short term development aid.

Dutch pledge
At the celebration Deputy Director-general for International Cooperation at the Dutch Ministry of Foreign Affairs, Reina Buijs marked the beginning of this unique collaboration. “Working together is necessary for achieving progress. And progress is what we do need right now.”

According to Buijs the programme helps the Dutch government to achieve its pledge to make a significant contribution to the UN’s sixth Sustainable Development Goal. 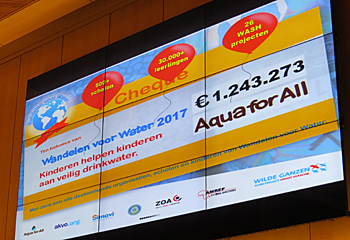 The total amount of the Walking for Water sponsorship raised by 30,000 Dutch school kids for WASH-projects in development countries.

Walking for water
Traditionally at the Dutch celebration of World Water Day, the total amount of money raised by the Walking for Water fundraising initiatieve is announced.

This year 500 primary schools participated, resulting in 30,000 students walking a distance of six kilometres – with a backpack containing 6 liters of water – representing the average distance women and children in developing countries have to walk every day to get their water.

This year the students collected 1.24 million euros, which is considerably more than last year, when the initiative amounted to 1.04 million.

With the amount raised this year the 'Walking for Water' organization expects to fund some 26 water and sanitation projects in developing countries. 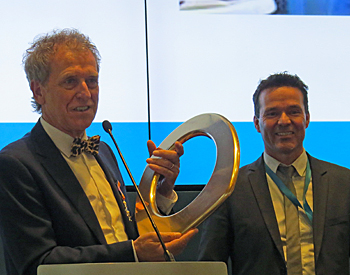 Dick van Ginhoven (left) has retired as senior WASH advisor for the Dutch government and symbolically handed over a ‘golden’ toilet seat to his successor Pim van der Male.

Farewell Dick van Ginhoven
The Dutch celebration of World Water Day was combined with the farewell of Dick van Ginhoven, senior WASH advisor at the Ministry of Foreign Affairs, due to his retirement.

On the occasion Van Ginhoven was praised for its international commitment to the introduction of the sustainability clause, which stipulates that newly installed water pumps in development countries must be kept operational for at least 15 years.

However, Unicef has now adopted the specification too and the US and British aid agencies are considering it.

School kids of the primairy school Twaalfruiter in Vleuten, the Netherlands, raised 4598 euro for WASH-projects in developing countries.