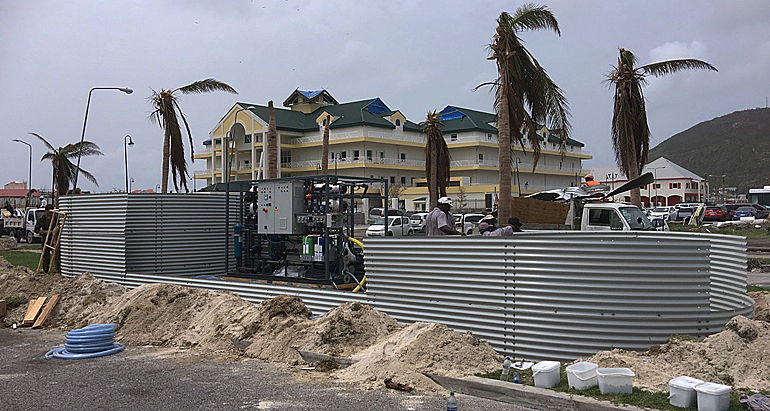 Twenty days after his arrival at Irma-struck island of Saint Martin in the Caribbean, director Peter Bulsing of Dutch Water Partners got a mobile Reverse osmosis installation up and running to deliver drinking water in the streets of Philipsburg.

The installation produces daily 70 m3 drinking water from sea water. People can tap the water on the street. The installation was built on behalf of the Dutch government. The island of Saint Martin is part of the Kingdom of the Netherlands. 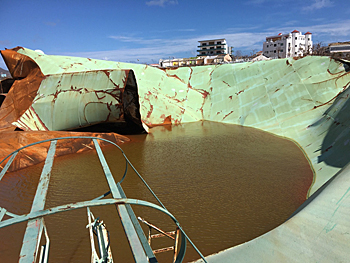 One of the five water storage tanks that collapsed ater hurricane Irma hit the island.

Knocked out
Immediately after hurricane Irma had devastated the island of Saint Martin on 6 September, it became clear that the water supply had been knocked out. Five of the eight water storage tanks had been damaged.

In the first days, Dutch marines distributed bottled water that was delivered by the marine vessel HMS Zeeland.

As a temporary measure, it was decided to construct a mobile water treatment plant and a network of several outdoor water taps where people could get their own drinking water within 500 meters.

Second hurricane
After his arrival at Saint Martin, Bulsing and his team made a more detailed plan and with the staff of the local water utilities GeBe.

Meanwhile the second hurricane Maria passed and no one was allowed to go on the streets. The harbour was closed and the ship with the materials for the water facilities had to wait out the hurricane. 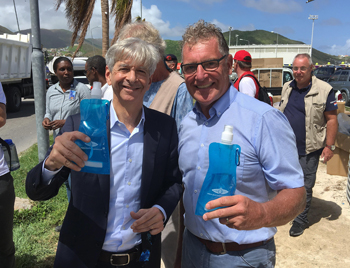 Peter Bulsing of DWP (right) celebrating the delivery of the first drinking water together with Dutch minister Ronald Plasterk.

First drinking water
It took another 10 days for the material to arrive and Bulsing and his team could really start building the RO unit and three distribution tanks.

On day 20, the plant supplied the first drinking water and residents could fill their jerrycans.