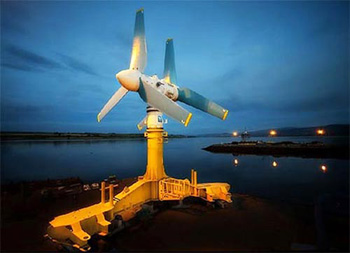 The international business consortium Clearwater has been given approval by the Dutch government to proceed with the preparations of an innovative tidal stream energy generation project. The Clearwater project aims to generate energy from lower velocity tidal streams in the Eastern Scheldt estuary.

Low tidal velocities
According to the consortium the tidal energy project is remarkable, because it will generate energy from lower tidal velocities and consistent currents, something that was not possible in an efficient and cost effective manner up until now. Normally, tidal turbines are applied in areas with strong tidal currents.

Breakthrough in delta areas
It is estimated that with the consortium’s initiative, 50% of the total economically exploitable free stream energy in The Netherlands is secured. This breakthrough accomplishment can open up the potential for tidal stream energy in Delta’s around the world with similar conditions, in particular where access to conventional energy is a problem.

Export boost
The Clearwater initiative was proposed as a business case to Top Team Water, who in a bid to boost export of the Dutch Water Sector, invited the Netherlands’ leading industry members, research and government institutes to submit business cases that would strengthen the sector’s export base.

Innovative business cases
Selected business cases were put forward to the Dutch Government’s Ministry of Economic Affairs (Minister Verhagen) for immediate implementation in the Netherlands on 17 June 2011, with the Top Team adding momentum and support in order to shape the right conditions for swift implementation. The Clearwater initiative is in line with the ambition of the Zeeland Province to become the Water Energy Valley.

Read also on the websites of Royal Haskoning and Atlantis Resouces Corporation
.