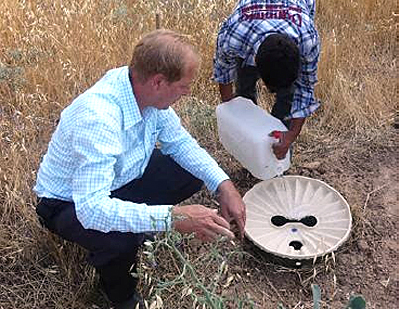 AMMAN - An initiative that seeks to increase the Kingdom’s green cover by utilising an “intelligent water incubator” that produces and captures water from the air through condensation and rain, will be launched soon in Jordan.

The initiative will be implemented by several local NGOs in partnership with Desert Tulip, a Dutch-Jordanian company, through the Ministry of Agriculture, according to Michael Schuring, general manager of the company.

"The idea is to help increase the green areas in Jordan and acquaint NGOs, farmers and concerned people with the new technique called Groasis waterboxx," he said in an interview with The Jordan Times last week.

The campaign entails planting saplings in desert areas using the Groasis waterboxx, which was created by Dutch inventor Pieter Hoff.

The device is an “intelligent water battery” that produces and captures water from the air through condensation and rain. The condensation is caused by artificial stimulation and the water is captured without using energy, according to Schuring.

"The Groasis waterboxx makes it possible to plant trees, bushes or vegetables on rocks, on mountains, in gardens, in ashes of recently burned woods, eroded areas or deserts or any other place, without the help of irrigation with good planting results," he added.

Abduallah Khudruj, who used the device in his farm in Jerash, said the results were "promising".

"For each sapling, I usually use more than 20 litres of water every 10 days, but after I used the device in my farm in Jerash, I used only 10 litres of water in 90 days to irrigate one sapling," he told The Jordan Times on Sunday.

"This is a very good technique that will help farmers a lot. It definitely helps reduce water consumption. There is a water shortage in Jordan and inadequate rainfall… with this device farmers need not worry any more," added Khudruj, who also owns farms in Amman and Mafraq.

"It is efficient, but our main reservation is about the price. It is a modern solution, but costly. The cheaper it is, the more farmers will use it," he said, noting that it can help Jordan save water.

"I am optimistic that it will help Jordan reduce water use and grow plants in desert areas," he said, noting that the technology is used in over 25 countries, including Ecuador, the US, France, Spain, Morocco, Mongolia, India and Kenya.

"Water is everywhere in the air and this technique is about how to get rain out of the air. It can help grow trees in even the most arid areas, which can help increase the green cover in Jordan without using any water for irrigation," he added.

The Groasis waterboxx was awarded the Dutch Bèta Dragons Science Award in 2008, and in 2010, it received the Green Tech Award from Popular Science, an American magazine with over three million readers, as well as the “Best of What’s New” award, according to its website.

This article was originally published on the website of Jordan Times on June 20, 2011.

For the latest'results of this EU Life+ against erosion and desertification, see website:
The Green Deserts.