These are two main outcomes of a two year Dutch pilot on the Kutubdia Island, Bangladesh. The pilot was part of the Ecological Engineering for Coastal Protection and Food Production (Ecobas) project that concluded in December 2014.

"This proved to be the best, technologically and financially. The oysters attached themselves to the hollow concrete structures, which also form a habitat for crabs and fish", says professor Tom Ysebaert of Dutch marine ecology research institute Imares. Ysebaert investigated the socio-economic possibilities of the artificial oyster reef. 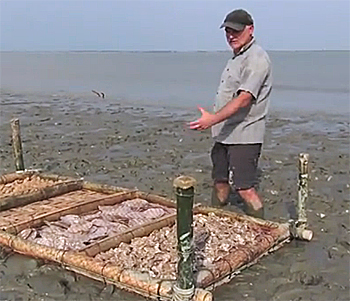 Tom Ysebaert at the start of the Ecobas project when the type of oysters was selected (also see video below).

Well growing oysters
After one year there were large numbers of oysters, while the wave-dampening effects resulted in sediment being deposited behind the reef. "The oysters showed good growth. After one year we already had oysters measuring four centimetres", reveals Ysebaert.

According to calculations with models, the oyster reef could grow in height by about two centimetres per year. This will allow it to keep pace with the rising sea level.

Protection against tropical storm
But when a genuine tropical storm hits, an oyster reef is not enough. "'We expect that the mangrove forest will survive better and spread faster if there is an oyster reef present. In order to protect the coast, a strip of mature mangroves measuring at least 250 to 500 metres wide is needed", explains Ysebaert.

Self-reparing coastal defence
Not every sea floor location along the coast is suited for mangroves and oyster reefs. Ysebaert: "This method can be applied at a great many locations. It's impossibly expensive to construct concrete dikes everywhere, and the earthen dikes alone are often too vulnerable. This form of eco-engineering is sustainable, durable and relatively inexpensive. In the long term, it provides a self-repairing coastal defence system of oyster reefs and mangrove forests."

Follow-up research is currently taking place, and the Bangladeshi government is interested in larger pilot projects.

This news item was originally published on the website of Wageningen University/Ecobas.

Tom Ysebaert of Imares at the start of the pilot in 2012, explaining the selection of type of oyster.