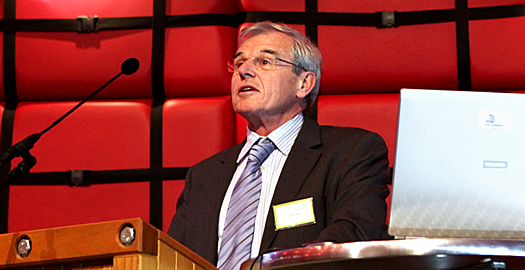 “A better understanding of the environmental effects speeds up marine infrastructure projects and reduces the costs”, said director Huib de Vriend on the occasion of the fifth anniversary of the Ecoshape research consortium in Rotterdam on November 15th.

The Ecoshape consortium was formed in 2007 by two leading Dutch dredging companies Van Oord and Boskalis, also involving the research institute Deltares, the universities of Delft and Wageningen, consultancy firms Arcadis and Royal HaskoningDHV and Witteveen+Bos.

The participants want better understanding of coastal ecology for environmental friendly dredging and to be able to use natural processes for beach nourishment and land reclamation. The latter is also known as the ‘building with nature’ concept.

The consortium started with a budget of 30 million euro, half financed by the private sector and half by government. During the lustrum conference its achievements were presented, including seabed landscaping, restoring coastal ecosystems, concentrate nourishment and environmental friendly dredging 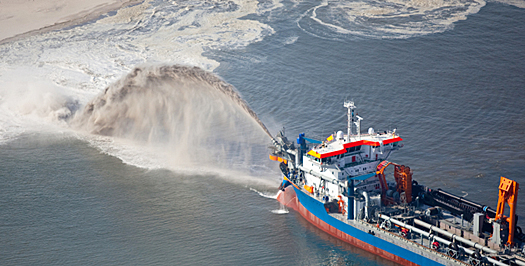 More gradual land-water transition
“The programme has so far led to the great number of PhD-studies and pilot projects that have improved the knowledge and experiences with the concept of Building with nature”, explained director Huib de Vriend of Ecoshape on the occasion of the anniversary. “In the Netherlands we have developed a flood defence system with solid dikes that sharply divides land and water. Five years ago we started the Ecoshape research project to be able to learn more about natural coastal processes and environmental conditions to be able to create gradual land-water transition.” 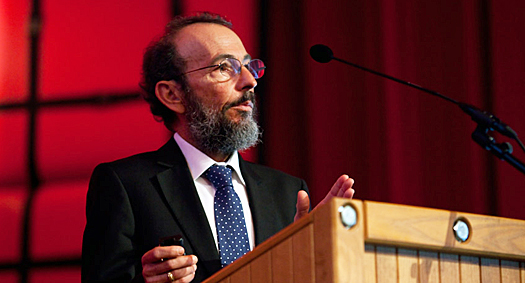 At the anniversary conference Ray Masini, manager marine ecosystems of Australia’s national Environmental Protection Authority, spoke about the importance of environmental friendly dredging. “Within the dredging sector the hydrological models are well developed, but not so the transportation models of dredge plumes, and accordingly little is known of the environmental impacts at the start of a dredging project. As a result the permits are based on a worst case scenario and include extensive monitoring requirements ”.

With its many coral reef this poses a great problem to the Australian marine infrastructural projects. “With a better understanding of the ecology and reliable models, we know what to expect. This enables us to learn in the process of the project and adjust the activities where necessary. The great advantage is that the monitoring requirements in the permit can be reduced ”, told Masini. 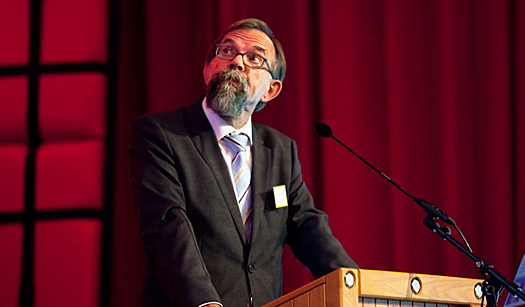 Frank Verhoeven, founding father of the Ecoshape consortium and currently board member of Boaskalis, spoke about the long lead time of dredging projects close to vulnerable coastal areas. “Last month a dredging project in the harbor of Hamburg was put on hold by court because of concern of its environmental impact.” Verhoeven criticized the poorly scientific based environmental impact studies. “Hopefully we will be able to improve the environmental standards so there will be less project delays.”

More fish inside selective dredged sand pit
“For the continuation of marine infrastructure projects we have to improve our environmental skills”, said Verhoeven. As a successful achievement by the Ecoshape consortium he mentioned the ‘seabed landscaping’ of sand pits. “As part of the c construction of the Maasvlakte 2-project we did a pilot with selective dredging and landscaped the 20 m deep extraction pits with artificial sand ridges. Inside this landscaped pit we found five time more fish, and more species, than outside it”, said Verhoeven.

Sand motor running
The best known pilot project conducted by Ecoshape is the ‘Sand engine’ along the Dutch coast near The Hague. The innovative beach nourishment project is the best example of the ‘building with nature’ concept. By concentrated beach nourishment an artificial peninsula had been created. Wind, waves and tide are now gradually redistributing the sand of this artificial peninsula along the coast causing less disturbance of the local ecosystem compared to classic nourishment.

This video shows the construction and monitoring of the Sand motor.

More international pilot projects
Director Huib de Vriend of Ecoshape showed enthusiastic about the interdisciplinary cooperation between civil engineers and ecologists. “Many ideas have now been picked up worldwide”, said De Vriend. An new research programme is currently being developed for the next five years. “We are looking for more international participation to start pilot projects on non-sandy coasts”, concluded De Vriend.

At the conference the book ‘Building with nature – Thinking, acting and interacting differently’ was presented describing the achievement of the Ecoshape research project.
The book can be downloaded - as a pdf-file, 9mB - from the website of Ecoshape

The first version of the ‘Building with Nature Guideline’ has been published and an editorial board controls a WIKI on the guideline.
See: Wiki Building with nature?