The model shows that in 0.8 percent of all fresh water systems worldwide concentrations of diclofenac – a pain killer - already exceeds the EU watch list limit of 100 nanogr/l.

By 2050 this will increase to 1.3 percent, considering climate change and population growth. So without additional measures to remove diclofenac from waste water, the model predicts an increase of 65 percent.

The EGU2018 press conference on contaminated waters took place in Vienna on 10 April. 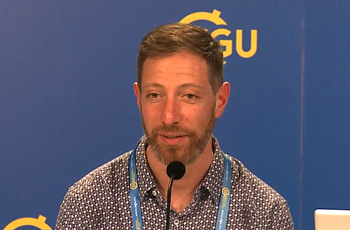 Francesco Bregoli, a post-doc researcher at IHE Delft, presented a model to predict current and future dilution of pharmaceuticals in freshwater ecosystems worldwide.

New model: case of diclofenac
Scientists from IHE Delft and the Catalan Institute for Water Research have developed a new model that can predict current and future dilution of pharmaceuticals in freshwater ecosystems, like rivers and lakes.

Their model is applied to the case of diclofenac, a common anti-inflammatory drug used to reduce pain.

The research showed that if no mitigation action is taken, the environmental threat will increase by 65% in 2050.

The model can also be generalized to other pharmaceuticals than diclofenac. 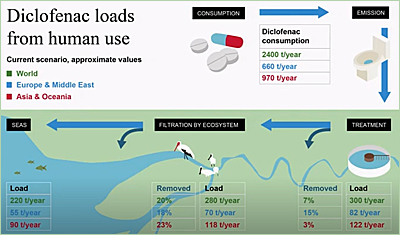 Outcome of the model to predict the loads of diclofenac as consumed, removed by waste water treatment, removed by the fresh water systems and the remaining volumes that end up in the sea. In green is worldwide, in blue is in Europe/Middle East and in red in Asia/Oceania.

Consumption reduction needed as well
Francesco Bregoli: ‘With this model, we are able to predict current and future dilution of pharmaceuticals in freshwater ecosystems, taking into account scenarios of climate change and population growth.’

According to Bregoli the model shows that technological improvements alone will not even be enough to recover from the current concentration levels.

'If a substantial consumption reduction is not implemented, a large part of the global river ecosystems will not be sufficiently secured', he said. 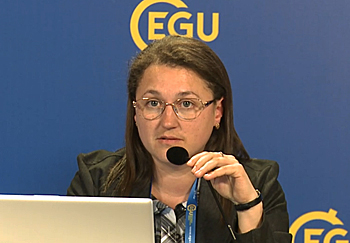 Maryna Strokal, researcher at Wageningen University, presented a model to identify hot spot areas in the world with multi-pollution problems in rivers.

More sewage connections, more contamination
Another speaker at the press conference was Maryna Strokal, researcher at Wageningen University, the Netherlands, and she addressed the issue of the growing contamination of rivers when more households and companies will be connected to the sewage.

Strokal advocated multi-pollutant assessment to be able to identify effective solutions to counter such an increase. She presented a framework of a hydrological model developed at Wageningen University to assess river quality, using sub-models for different pollutants such as nutrients, river temperature, oxygen, plastic, pathogens and antibacterial agent and hormone disruptant Triclosan. 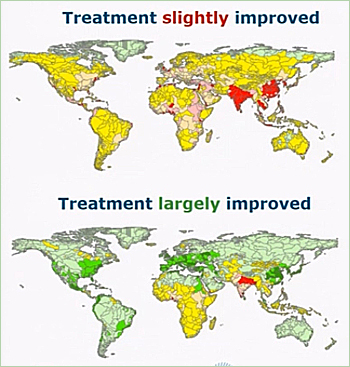 Only largely improved waste water treatment can really improve the quality of river waters worldwide. In green the quality improvement, in yellow more polution and in red the hot spot areas that emerged from the model.

Strokal showed that the model can be used to identify hot spot areas in the world with multi-pollution problems in rivers.

Highly improved treatment
The model shows that by 2050 – when more people will live in cities – river pollution will increase worldwide if the treatment of waste water is only slightly improved. Especially heavily populated areas in India and Eastern China the river water quality will seriously deteriorate.

According to Strokal the model shows that only the implementation of highly improved waste water treatment can lead to cleaner rivers. As an indication Strokal mentioned the EU discharge standards as reference to drive such high efficient treatment of sewage water.

View the live stream of the EGU2018 press conference 'Contaminated waters: pollutants in rivers and groundwater'.