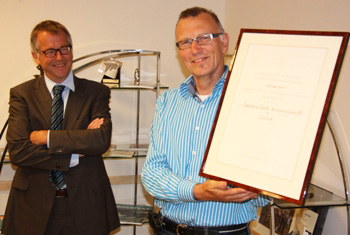 From now on the Eijkelkamp Earth Sampling Group is allowed to use the designation ‘Royal’ in its name. This news was announced by mayor Jan de Ruiter of the municipality of Zevenaar during the reception on 27 May. The festivity was held to celebrate the 100-year existence of the company.

Managing director at Chamber of Commerce Gelderland, Ronald Migo, especially pointed out the uniqueness of the designation: “Not many companies manage to become a 100 years, becoming ‘Royal’ is even more rare.”

Trustworthy company
The designation ‘Royal’ symbolizes the respect, appreciation and trust of The Queen of The Netherlands towards the company. Only the Queen can confer on a business, association or institution the right to use the designation.

Since 1911
The company which consists of Eijkelkamp Agrisearch Equipment, Eijkelkamp Training & Consultancy, Eijkelkamp Tooltech en SonicSampDrill, contributes to a more durable use of the earth since 1911 by developing and supplying equipment for environmental research.

Honourable decoration
Owner Fons Eijkelkamp, grandson of the founder, is still very impressed by this honourable decoration: “It is the highest appreciation for 100 years of entrepreneurship you could wish for. Internationally the designation ‘Royal’ is also enormous. Companies that are ‘Royal’ are abroad also known for their reliability, leading position in the market and financially stable situation. From now on we are part of these organisations and it makes me proud. It is also a great starting point for another 100 years of Eijkelkamp Earth Sampling Group.”

The picture was made on the open day with mayor Jan de Ruiter (l) and Fons Eijkelkamp.