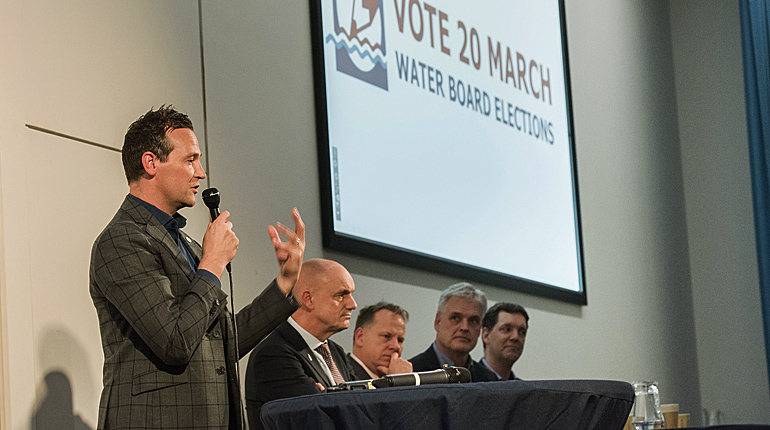 In a country where half of the land is situated below sea level – and cities are kept artificially dry with levees, canals, and pumping stations – maintaining water levels is a big deal. Especially now the climate change is leading to more extreme weather events, both in sense of longer dry periods with too little water as well as more cloud bursts with too much water.

In all 21 districts candidates for the water boards debated their different views on managing all water-related issues in their specific district. 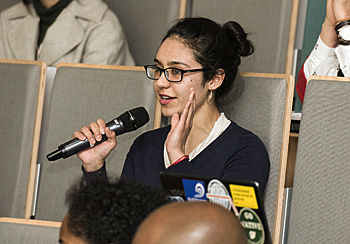 Political debate for students and expats
One of these debates stood out, as it was in English. On 15 March, the water education institute IHE Delft organised a debate (on top photo) for their international students and the local expat community, who, as residents of regional water authority Delfland, can also vote tomorrow on their candidates.

It is often said in Dutch regional water authority elections that a levee is not a left- nor a right-winged solution. There is nothing political about a levee. However, it is possible to debate about the timing of the strengthening of it, or provide additional funding for a cycle path so tax payers can also enjoy the levee.

Highest tax rates
It was no surprise that the five candidates agreed on many issues. Until the question arose who should pay the bill. Delfland is with its annual tax of 450 euro by far the most expensive regional water authority in the Netherlands. The water authority is very densely populated leading to a very expansive water infrastructure. It also has to drain many deep polders and prevent the seepage of silt groundwater.

The high water tax is a big issue for low income people and the many students that live in the district. Hans Middendorp of the Algemene Waterschapspartij therefore advocated a more fair taxes system that allows people with a low income to pay less taxes.

Land subsidence in polders
Delfland is situated along the coast and faces sea level rise. But at the same time it faces land subsidence as the peat in its polders oxidates. The debate on this issue revealed a political opposition. Marcel Belt (Water Natuurlijk) wants his water authority to raise the water levels in those peat lands to stop the subsidence – and the emission of CO2. However, as he plead, this should be done in consultation with local farmers that need dry land to run their businesses. Therefore the water authority is currently keeping the water levels low in the polders. 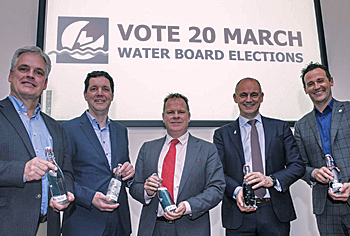 "The time for mono functions is over. Land in the Netherlands is too scarce for that. We have to look for multifunctionality in which agriculture and biodiversity go together", said Belt.

Maarten Jansen (CDA) opposed and told not to believe in compromises. "If there are farmers in an area, look for an overall solution. Do not raise the water level if there is a small nature area near a farming area. Look at the main function of an area as a whole", Jansen said.

Medicine residues
A striking disagreement emerged in the debate on the removal of medicine residues from municipal waste water. Hans Middendorp (AWP) was in favour, but Leon Hombergen (PvdA) did not understand why AWP recently voted against the expansion of a waste water treatment plant with an additional treatment step.

Middendorp explained to have voted against because his party considered the investment an inefficient use of tax payers money. "Only a quarter of the effluent is additionally treated and the discharge point is located very close to the sea", he explained. "We are in favour of additional treatment at real hotspots. At waste water treatment plants where the removal of such medicine residues makes much more sense and contribute more to cleaner surface waters."