The Dutch Province of Zeeland has published an online map showing the presence of fresh, brackish and saline groundwater. The data has been collected with an electromagnetic ‘cigar’ hanging underneath a helicopter.

The map shows the volumes, depths and locations of fresh groundwater, providing important data for local farmers and water authorities. 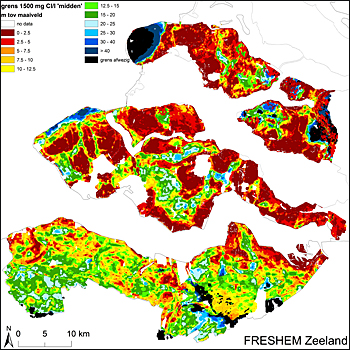 Usable groundwater data
Together with TNO and BGR, Deltares developed the method for converting electromagnetic measurements into useable data.

“By combining saltwater-freshwater data with a broader knowledge of groundwater systems, we can make predictions about climate change and sea-level rise”, says Deltares-researcher Esther van Baaren.

“As a result, we are able to make predictions about the availability of fresh groundwater in the future”, van Baaren continues.

Helicopter-borne measuring
A helicopter of the Bundesanstalt für Geowissenschaften und Rohstoffe flew over the province many times, carrying electromagnetic transmitters and receivers that are housed by a tube, the bird.

By transmitting dipole signals the bird can determine boundaries of fresh and salt groundwater up to a depth of 100 m. 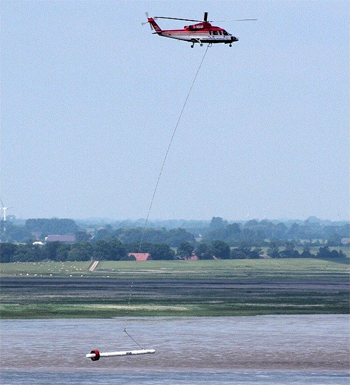 Imbalanced availability
Many areas of the province of Zeeland have few options for supplying their own fresh water for domestic and agricultural use. Over the year as a whole, there is more precipitation than evaporation but the situation is reversed in the summer, when there is simply not enough water available.

This imbalance is being exacerbate by climate change. “In the long run, that will cause problems for the availability of fresh water in Zeeland”, predicts Ben de Reu, Deputy Water of the Province of Zeeland. “That is why the province stimulates a number of initiatives for storage of and more efficient use of fresh water”.

The fresh-saline mapping also helps farmers in Zeeland to store fresh water underground when rainfall is plenty in locations that have been identified as promising by the measurements.

Farmers and nature managers now know where the subsurface is saline and how saline it is exactly.

Worldwide fresh water hunt
This month a similar project will start in Belgium on behalf of the Vlaamse Milieumaatschappij within the European project Topsoil. The aim is to identify promising agricultural sites for the underground storage of fresh water.

In the hunt for scarce fresh water, Deltares is using similar technology to map the fresh-brackish-salt distribution in the Vietnamese subsurface. A WalkTEM survey learned that the distribution is extremely heterogeneous: at large depths down to at least 200 metres, fresh groundwater can be found next to salt water.

Deltares works together with NWO, Utrecht University, the Danish Aarhus University, TNO en The Vietnamese Division for Water Resources Planning and Investigation for the South of Vietnam.

The groundwater salinity maps of the Province of Zeeland are available online at www.zeeland.nl (in Dutch only).

This news item was originally published on the websites of Deltares (in English), Regional water authority Scheldestromen (in Dutch only) and Province of Zeeland (in Dutch only).