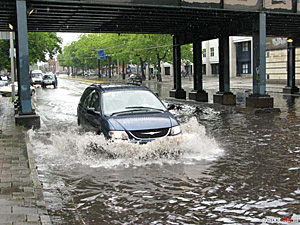 Technical University Delft is to participate in the RainGain project, which was recently awarded a European subsidy. The project includes such aspects as the placing of rain radar in Rotterdam, which is specialised in local precipitation measurement. This will enable precipitation patterns in the city to be measured much more accurately and urban water management to be deployed better and more efficiently. Possible applications include the intelligent control of pumping stations, the use of water storage (the water squares in Rotterdam) and local weather reports.

Cooperation with Belgian, French and British partners
Dutch partners in the project are the Municipality of Rotterdam and the Province of Zuid-Holland. The faculties of Civil Engineering and Geosciences (CiTG, Water Management department) and Electrical Engineering, Mathematics and Informatics (EWI, Remote Sensing of the Environment department) from the TU Delft are involved. In addition, there is co-operation with Belgian, French and British partners.

Required time and space scalesRain radars are the only measuring instruments that can provide precipitation measurements on the necessary time and space scales that are required for this purpose. This technology has only recently been developed to the detailed level needed for urban areas. The innovative technology will be implemented in water management practice in the pilot locations of the partner countries.

New radars in Rotterdam and Paris
The new radars have been provided for pilot locations in Rotterdam and Paris. Similar technology was installed in Leuven (Louvain) in Belgium several years ago. In the United Kingdom, a new super-resolution protocol will be used for detailed precipitation data on the basis of the radar of the Met Office.

Improved urban water management
The precipitation data will provide detailed information about peak precipitations to the urban water managers, on time and space scales that are critical for the fast urban drainage processes. The information will be used in flooding models for the pilot locations in the four partner countries to develop effective solutions for improved flooding protection, such as warning systems and optimisation of storage capacity.

These solutions will then be tested on the basis of the detailed precipitation data and flooding models. The end users will be trained in the use of the rain data and the models, so that they can continue to apply them in practice after the project.