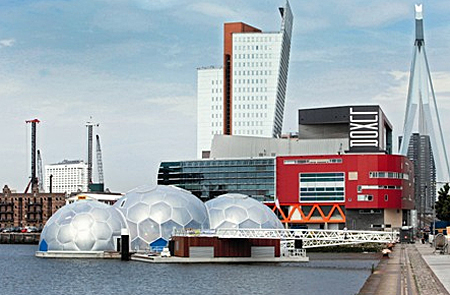 There is a maximum size and weight for a floating house. Beyond a certain limit a structure loses its buoyancy and simply sinks. The Dutch constructors of the company Dura Vermeer initiated the Eureka-project Floatec and together with a Spanish companies Acciona Infrastructures and Solintel, a stronger floating construction was developped, made of multiple layer modified polystyrene.

Experimentation on amphibian houses
The results of Floatec can be found all over Europe, but the Netherlands is the primary market for the solution developed within the project. ‘It had the full backing of the Dutch government’ says Edwin Blom, project leader at Dura Vermeer. ‘The authorities designated some areas of the country as preferred grounds for experimentation on amphibian houses’.

The project also benefited of a unique legal obligation existing in Netherlands: 7% to 12% of every construction site is to be dedicated to water storage, which makes floating houses also very convenient.

Beyond construction limits
So, how do you build a floating house? Edwin Blom describes it as a relatively easy construction process: The secret lies in the foundations of the building, made of multiple layers of light plastic foam supporting the concrete, allowing it to float the same way a boat would do. But the technology used until now has its limitations.

There is a maximum size and weight beyond which a structure loses its buoyancy and simply sinks. The engineers from Dura Vermeer had to look for a technological partner able to solve this problem, the key being in the use and development of the right type of material.

Outright market leader
The leading partner in the Eureka Floatec project, Dura Vermeer, is a Dutch company specializing in building homes in a country where many would consider buying a houseboat. It is currently employing some 3000 people in The Netherlands. Over the last 12 years, this company has become an outright leader in a market that barely existed before - that of floating buildings.

With some revolutionary achievements under its belt, such as the Rotterdam floating exhibition pavilion, a greenhouse built on water, or the amphibious village in Maasbommel, all located in Netherlands, it has a strong record of daring architectural projects.

Read the full article on the Floatec-project on the Eureka website
www.eurekanetwork.org