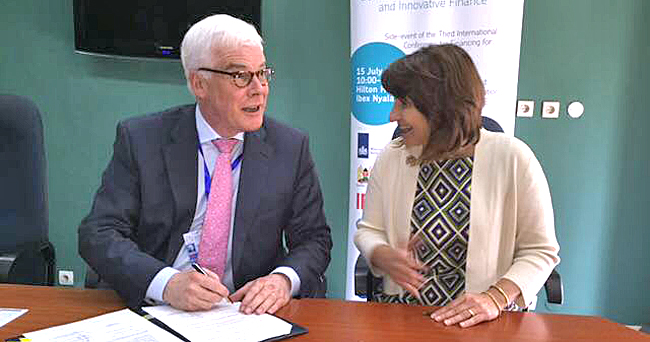 The European Investment Bank and the Dutch government are joining forces in support of the water and sanitation sector. Dutch foreign trade and development cooperation minister Lilianne Ploumen and EIB vice-president Pim van Ballekom, signed a Memorandum of Understanding on the margins of the Third international conference on financing for development in Addis Ababa, Ethiopia, on 15 July.

The main geographical focus of the collaboration would be developing countries, with a special focus on Africa, although it may extend to EU countries or neighbouring states as well. 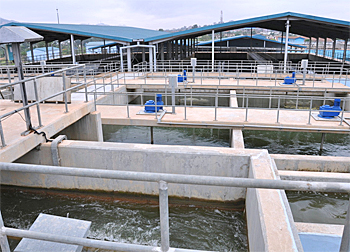 In 2011 EIB granted a loan of 75 million euro for upgrading the waste water treatment plant in Kamapala, Uganda.

Combining loans and grants
Pim van Ballekom, vice-president of the EIB, commented: "This new partnership will strengthen support for water investment in our partner countries. Combining our lending with Dutch grants and knowledge allows us to do things better, to explore innovative financing structures and to leverage much-needed investments from the public and private sector. This signing is a great step in supporting concrete projects that make real impact on the ground."

As an example Van Ballekom mentioned the recent cooperation in a water project in Malawi: "Here, the EIB’s financing leveraged initiatives of the national government, a local water board, a leading Dutch water company and a local NGO, which financed a project run by the local population to provide clean water for more than 750,000 people." 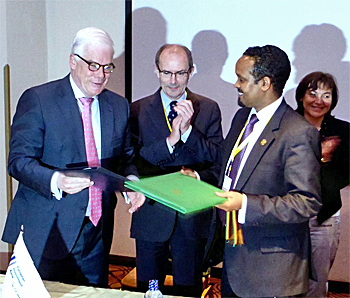 During the financial summit EIB vice-president Van Ballekom (left) also signed an agreement on a loan of 40 million euro for a water project in Ethiopia.

Making loans available outside Europe
Minister Ploumen added: "It’s a very positive development that the EIB, as the world’s biggest multilateral bank, is committing itself to the UN’s new sustainable development goals, in this case by making available loans for investments outside Europe in the field of water and sanitation. We look forward to working together with the EIB on this."

Within the scope of the new agreement, the Dutch government has confirmed its intention to provide 2 million euro in support of the bank’s activities in the water and sanitation sector.

Discussions are also underway with other potential bilateral contributors with the view of pooling resources to achieve critical mass and economies of scale. The partnership can help to improve project design and implementation, while offering sustainable financial solutions to critical investments.

This news item was originally published on the website of the European Investment Bank.

Dutch Ministry of foreign affaires
The Hague, the Netherlands
+31 70 3486486
www.government.nl/ministries/bz