EWTW2018: A look back on an event that connected water tech hubs worldwide 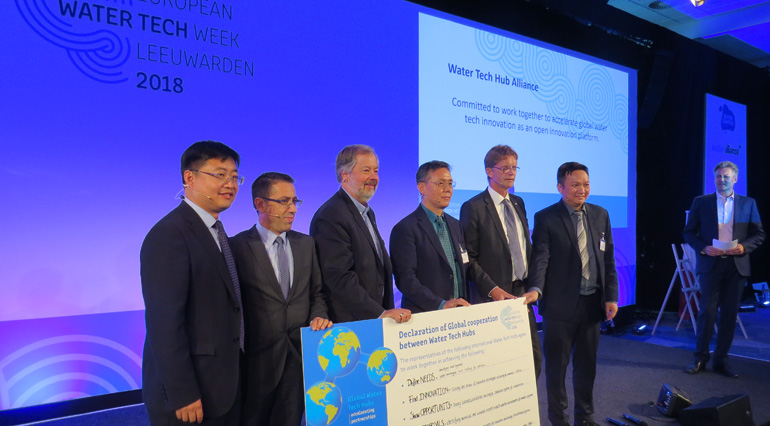 The signing of the declaration that calls for an alliance by six water tech hubs in different regions in the world, was one of biggest highlights of the European Water Tech Week, held in Leeuwarden, the Netherlands, from 24 – 27 September.

The organiser of the event, WaterCampus Leeuwarden, can look back on a successful first event that positioned the campus as the place-to-be for European water technology innovation. The first edition of this event drew over 1,000 visitors from 38 different countries. From now on the event will be organised bi-annually so the next European Water Tech Week will be held in 2020.

Below a photo look back on memorable moments. 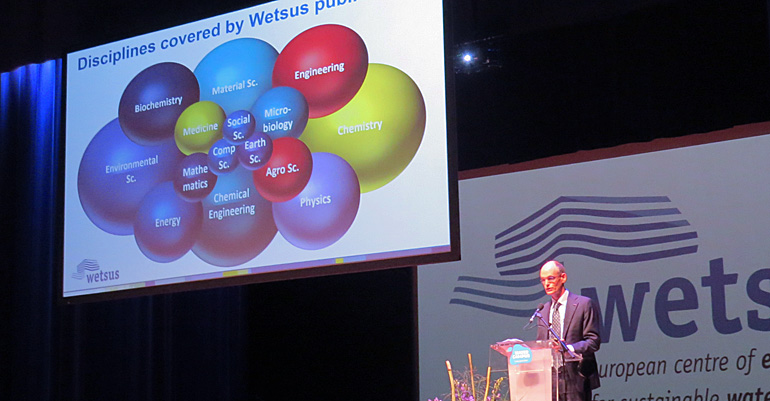 Professor Cees Buisman of the Wetsus research institute presented last year’s highlights. At the opening of EWTW he specially mentioned the ability of his institute to involve professors from different disciplines such as agriculture, energy, biochemistry and even social sciences, enabling research outside the own water technology silo. 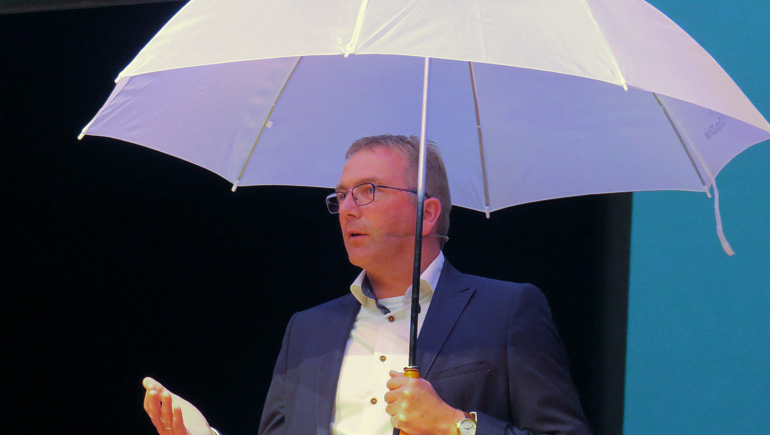 Johan Bel of Dutch start-up Mijn Fabriek pitched his innovative Drop2Drink unit while holding an umbrella in his hand. The unit produces drinking water from rainwater at low cost and is easy to maintain. Bel won the runners up prize in the Water Innovation Awards organised by the Water Alliance.

The miracle of the water bridge 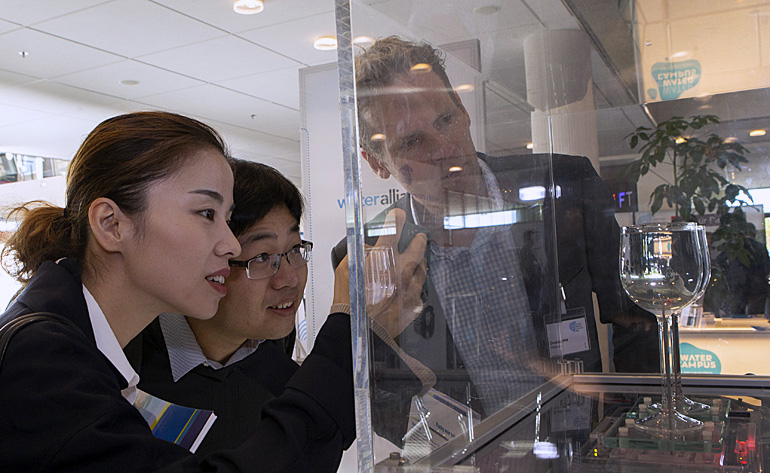 Visitors of the expo looked fascinated to the water bridge. At the right side of the photo above, are two glasses standing next to each other and when electrically charged the water in the glasses form a 1cm long water flow between the glasses. This phenonma of electrical charged water is used in research by Wetsus for the development of a battery on pure water, without any chemicals. 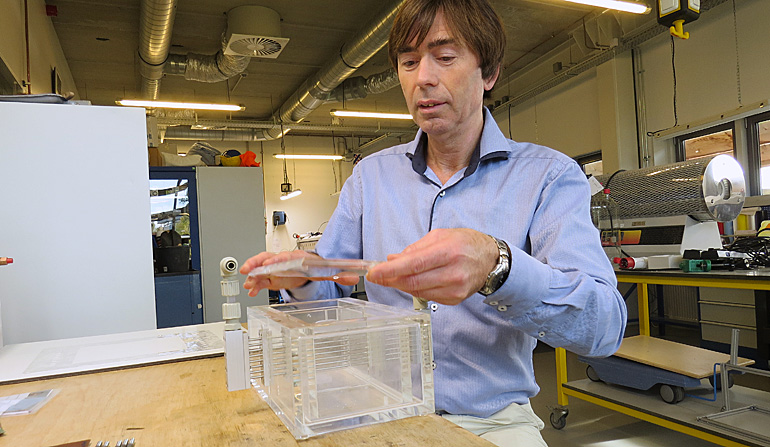 Wetsus Researcher Michel Saakes was mentioned as ‘chief tinkerer’ of the Wetsus research centre by director Cees Buisman. It became the buzzword during the whole event. The institute wants to stimulate its students not only to think out of the box, but actually start experimenting with innovations that are considered to be impossible. On the photo above Saakes is seen in his well-equipped laboratory working on a new model of a battery, using an ice-film between two redox solutions. The ice-film acts as a super low cost ideal membrane that cannot be made with current polymeric technology. Wetsus has filed a patent on this innovation. 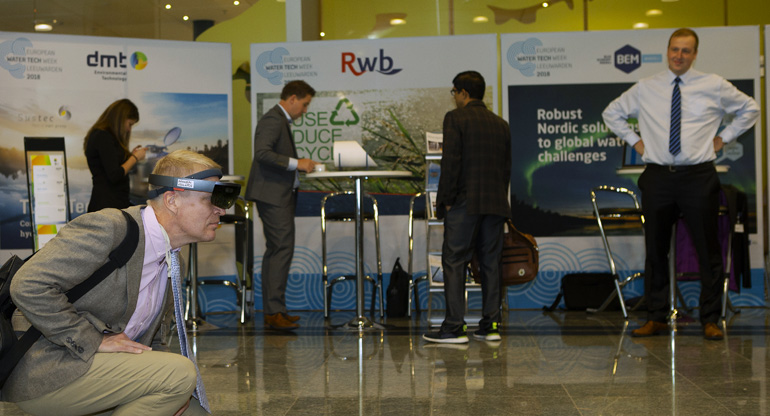 Virtual reality is more and more linked to the world of start ups and innovative solutions. The use of VR-glasses has become very common on the exbition floor of WaterCampus events. 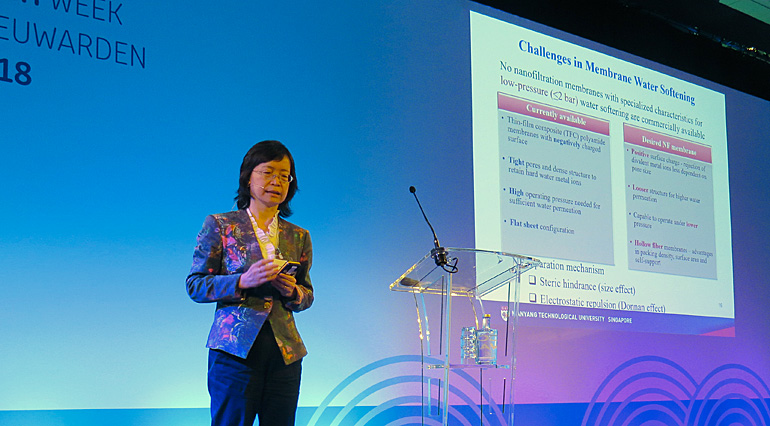 Professor Rong Wang of the Nanyang Technological University (Singapore) explained the need for Singapore to produce more drinking water, using more membrane filtration and reversed osmose for desalination and treatment of wwtp-effluent. By 2060 the island state wants to triple its current capacity. Her university of especially involved in research of higher energy-efficient membranes and the scale of potential innovations.

Below 10 ppb in surface water 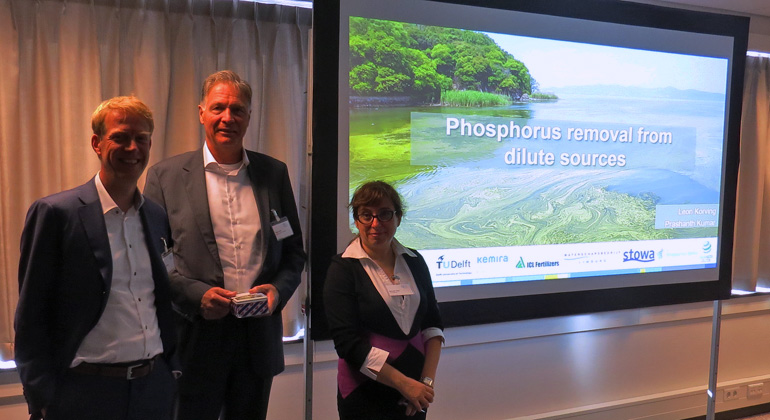 Leon Korving (Wetsus, left) and Koos Baas (Green Water Solutions, middle) participated in the session to combat algae blooms. Both Korving and Baas represent two of the remaining 9 contenders in the George Barley Water Prize that challenges innovators to remove phosphorous from large quantities of surface water to below 10 part per billion. Melodie Naja (Everglades Foundation, right) explained that below 10 ppb harmful algae cannot survive. For dissolved phosphate the Wetsus pilot has already reached concentrations as low as 10-20 ppb. With the lessons from the previous pilots, Korving said to know now how to get to even lower levels. However, a cost-effective removal of phosphorus particles seems the big remaining challenge. Later this month the four winners of the 4th phase will be announced who will receive an 125.000 US dollar price to continue their pilot. 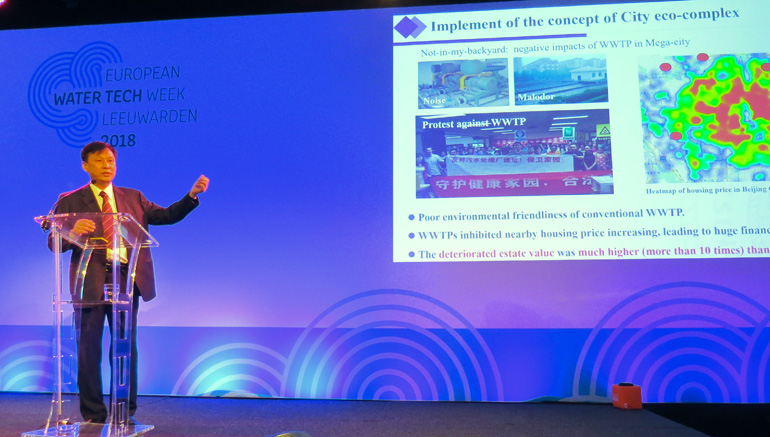 Professor Kaijun Wang of the Tsinghua University (Beijing) and member of special advisory committee for the Chinese ministry of environment, gave insight in an ambitious plan by the Chinse government to modernise its municipal waste water treatment plants. Not only the quality of the effluent of its existing 5,000 wwtp plants must be improved, but the odour problems should be solved as well. A modern Chinese wwtp must fit nicely in its surroundings or has to be constructed underground. 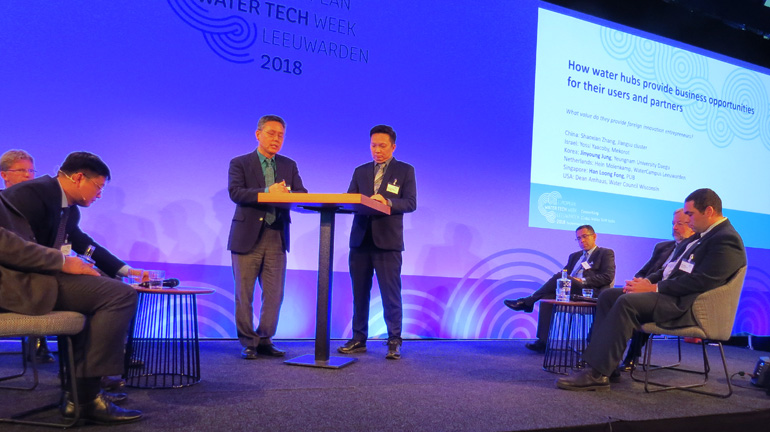 Highly unsual was the ‘room chat’ by the six representatives of the water tech hub from China, Singapore, South Korea, USA, Israel and the Netherlands. Invited by Dutch representative Hein Molenkamp (behind left) of Water Alliance, they discussed in public their ambitious to strengthen the ties between the hubs and create more impact with new innovative water technologies. One of the issues they discussed was for instance on how to create better facilities for top talents. Following this room talk the representatives proudly presented their declaration on the new initiative ‘The Global Water Hub Alliance’.. 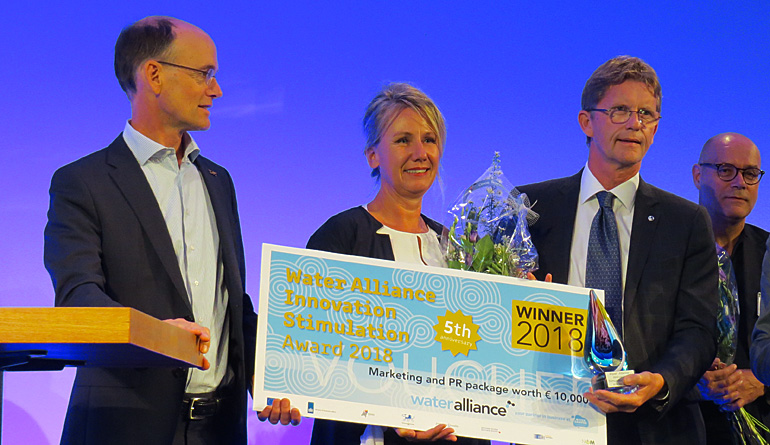 Sabine Stuiver (middle) of Hydraloop was announced as the winning pitch of the Water Innovation Stimulation (WIS) award 2018. The compact in-house Hydraloop unit to recycle domestic water has the impressive ability to save up to 85 percent on water and energy for a household. The jury especially praised the high market potential of Hydraloop as water scarcity is becoming a serious problem in many cities around the globe.

The next European Water Tech Week will take place in Leeuwarden, the Netherlands, from 21-24 September 2020.