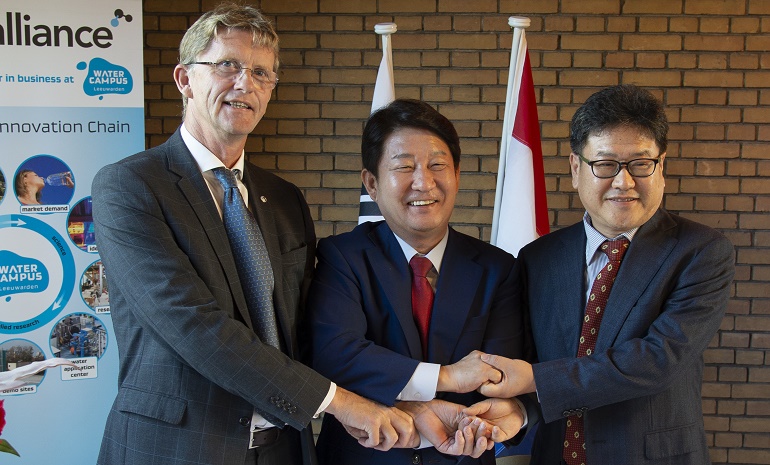 The signing involved director Hein Molenkamp (left) of Water Alliance, Mayor Kwon (middle) of the city of Daegu and
director Jin-Hwan Choi (right) of Dyetec, and took place during the European Water Tech Week in the Netherlands on 25 September. The water event is attended by a large South Korean delegation of 31 members.

The European Water Tech Week takes place from 24 to 27 September in Leeuwarden, the Netherlands. 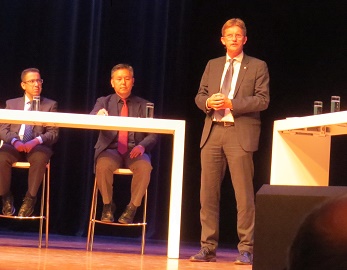 Follow up of earlier agreements
The MOU follows earlier agreements. In 2016 a delegation from Daegu visited the Water Campus and during the Korean International Water Week in September 2017, mayor Kwon on behalf of Metropolitan City Daegu and Frysian deputy Kielstra signed an MoU on behalf of the Dutch Province of Fryslân.

The aim of these agreements is to formally confirm each other's serious intentions to get knowledge exchange and business development off the ground. That has already resulted in an action plan.

Remarkable collaboration
‘The South Koreans are very impressed by the Dutch collaboration between the government, knowledge institutes and companies at WaterCampus Leeuwarden’, says director Hein Molenkamp at Water Alliance on occasion of the signing.

According to Molenkamp this remarkable collaboration has been at the basis of the development of the European Water Tech Week signing ceremony in Leeuwarden. 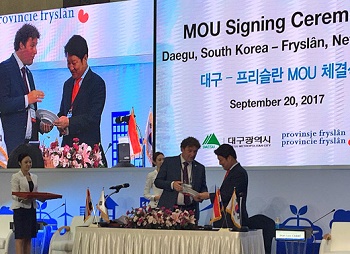 Regular visits
‘The Koreans have the ambition to also build up such a hub in their country for Asia’, Molenkamp adds. ‘As a result, we visit each other regularly, take part in each other's events and workshops, but we also try to connect knowledge institutions and companies from each other's regions. "

Like the Dutch, Koreans take business development very seriously, according to Molenkamp. ‘This is clearly illustrated by the fact that ten South Korean companies participate in the water week event in Leeuwarden.

About Dyetec
Dyetec is a non-profit organisation originally established to enhance the development of environmental friendly dyeing and finishing technology. It is a joint venture, sponsored by the national government, the municipal government of Daegu City and the private sector (Daegu Dyeing Industrial Complex) to unroll Korean's ambition on developing advanced water treatment technology.

About Water Alliance
Water Alliance, based at WaterCampus Leeuwarden, is one of the leading global water tech clusters in the world, bringing together public and private companies, government agencies and knowledge institutes to help develop new businesses into the international water market.