Worldwide economic losses from river flooding could increase 20-fold by the end of the 21st century if no further actions on flood risk reduction are taken. Over 70 percent of this increase can be attributed to economic growth in flood prone areas.

This is the outcome of a study conducted by a Dutch research team led by dr. Hessel Winsemius from the research institute Deltares. The study was published in Nature Climate Change on 20 December. 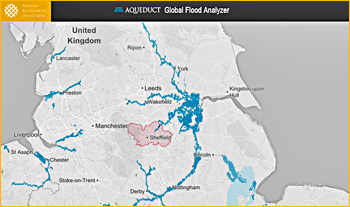 Main factor: expanding build-up areas on floodplains
According to Hessel Winsemius the increase of flood risk cannot be attributed to the adverse effects of climate change alone.

The main factor that is the unlimited expansion of build-up areas in flood plains.

"Our conclusions show that besides keeping global warming well below 2 degrees Celsius target, as negotiated during the COP21 climate summit in Paris, to reduce adverse effects of climate change, a lot of future risk can be prevented by spatial planning and flood resilient building in the rapidly growing economies in flood-prone regions", says Winsemius. 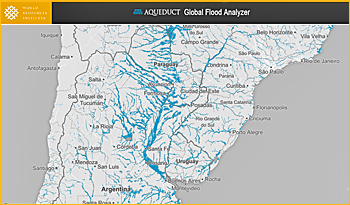 Exposure to flood events
River flood risk is on the one hand caused by flood events, occurring with a certain frequency and severity; and on the other by the exposure of people and economy to these events.

Whilst the frequency and severity of flood events is impacted by climate change, the exposed people and economy may grow as well, resulting in more assets and economic production located in harm’s way.

The Dutch research team specifically paid attention to the fact that economic growth not only causes increase in risk, it also results in a better ability to cope with these events.

Therefore, the researchers investigated in particular where economic growth is disproportionally large in flood prone areas and how this affects risk, relative to a country’s Gross Domestic Product. 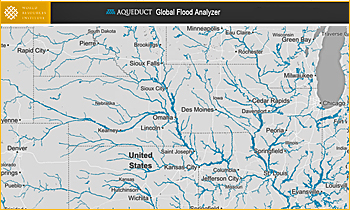 Largest increase in South-East Asia
The patterns are different for individual world regions. Earlier studies already showed that climate change scenarios show a clear and robust signal that South East Asia will face a large increase in risk due to climate change.

This new research shows that climate change impacts are dwarfed by the effects of economic growth in flood-prone regions, and that these two drivers may compound to an increase in economic risk of a factor six in South-East Asia.

This is after correction for the economic growth in the area.

Aqueduct is presently being extended with risk analysis for coastal flooding, and analysis of the feasibility and effectiveness of risk reducing measures.

Read the article 'Global drivers of future river flood risk' on the website of Nature Climate Change (not free of charge).