In his doctoral research at Plymouth University, Robert McCall has addressed the gap in predictive storm-impact models for gravel coasts. His research resulted in the development of the new, process-based, open source numerical XBeach-G model.

The development of the model was part of the project New Understanding and prediction of storm impact on gravel beaches (NUPSIG), a research collaboration between Plymouth University and several governmental and private partners, including Deltares, Channel Coastal Observatory, Environment Agency, HR Wallingford and Unesco-IHE.

The aim of the NUPSIG project is to help to protect gravel coasts in the United Kingdom against storms and rising sea levels. 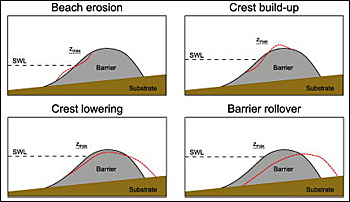 Limited guidance to maintain gravel coasts
Gravel beaches occur on many wave-dominated coasts across the world and are widely considered as an effective and sustainable form of coastal defence.

Despite their societal importance, relatively little research has been directed towards understanding the mechanisms leading to their failure during storms.

As a result, coastal managers have very limited guidance when estimating the potential for flooding on gravel coasts.

Extension of X-Beach model for gravel
The new XBeach-G model is based on the existing open source model XBeach and simulates the impact of storms on gravel beaches and barriers by solving the hydrodynamics of individual waves in the nearshore and swash zone, wave run-up and overtopping flows, groundwater processes in the beach and barrier, sediment transport, and morphological change of the beach during the storm.

Simulation of response to storms
The model represents a substantial improvement over existing empirical models in its ability to accurately simulate the response of gravel beaches to a wide variety of storms.

Application of the model has furthermore increased our understanding of the role of incident-band and infragravity-band waves during storms, and the role of groundwater processes in the stability of gravel beaches and barriers.

One of the key scientific papers discussing the development of the XBeach-G model was awarded the Halcrow Prize for the best paper published in the ICE journal Maritime Engineering. 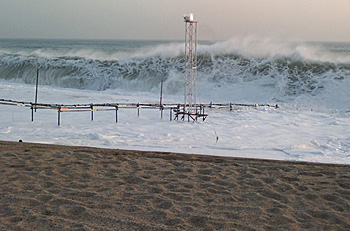 Field test at Loe Bar gravel barrier on the southwest coast of Engeland, as part of the NUPSIG project.

Deltares and Plymouth University have furthermore given training and assistance to 40 interested parties in the UK and the Netherlands.

The XBeach-G model, model GUI, and validation papers are freely available at the XBeach-G website.

Temporary gravel defences
Dredging companies use gravel to set up temporarily defences. They can also use the model for the design of these defences.

A well-known gravel beach is 29 km long and alomst 15 metres high Chesil Bank, Dorset, England (on top photo). During a big storm in 2014 the data was collected at this beach and used to develop and validate XBeach-G.

Simulation of individual waves in XBeach-G in the nearshore and swash zone, wave run-up and overtopping flows, groundwater processes in the beach and barrier.