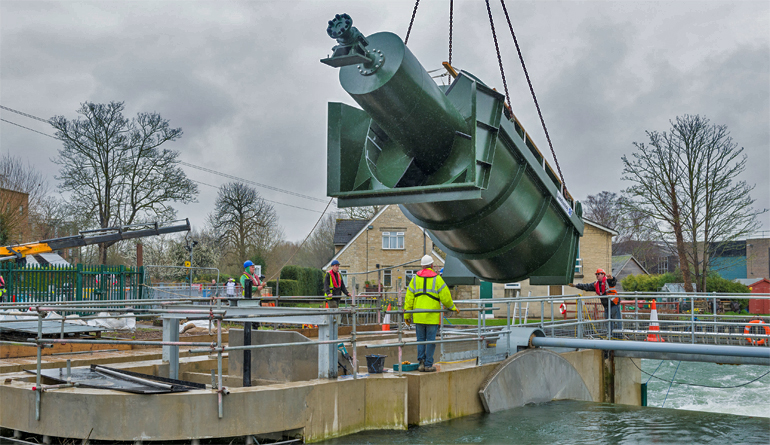 On 25 March the dreams of the local residents came to life when a 4.35m-long, four-bladed Archimedean screw was installed at Osney Lock – the final construction phase of the Osney Lock Hydro scheme.

Once operational, the scheme will harness the power of the river Thames to generate 179,000kWh per annum.

The screw was designed by Mann Power Consulting Limited in the UK and manufactured by Landustrie in the Netherlands. 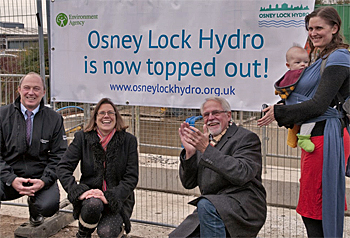 It was pushed forward in June 2012 when the Environment Agency gave notice that they were going to replace a weir at the site. A huge effort by the community to raise the funds and a willingness by the Environment Agency to work in partnership meant that the project was finally able to go ahead in July 2013.

The Osney Lock Hydro share offer raised over 500,000 UK pounds in just four weeks. Without this swift and significant support the project would not have been able to go ahead. Over 40% of the investment came from within a mile of the project and 4 out of 5 investors live in Oxfordshire. 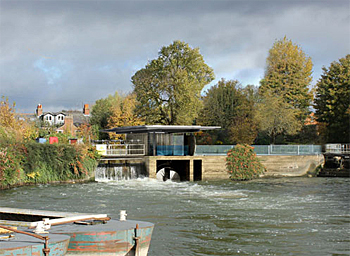 Green electricity
The Osney Island residents shared concern about climate change and a desire to harness the power of the river that ran around the island to generate green electricity.

A small island next to Osney Lock was identified as the best site for the hydro scheme. The island is owned by the Environment Agency so they were approached about the possibility of leasing the site.

It was discovered that work was to begin on the weir in 2013 so the pressure was on for the residents to draw up plans for the Archimedean Screw and secure planning permission and then most importantly secure funding for the project.

Income of 2 miilion pound
When the hydro scheme is finished in May 2014, it will generate enough electricity equivalent to that used to power around 60 houses. It will also generate an income of over 2 million UK pound over the lifespan of the project for the community to use for further environmental projects in the community.