A Dutch levee is about to breach. On purpose. The clay-peat levee of the Leendert de Boerspolder, just south of Amsterdam, the Netherlands, is subjected to a stress test and the final countdown for the levee to break has started. Within a few days the inner slope is expected to slide away.

The test is to reveal the real strength of the 500 years old levee of clay that rests on a peat layer. A few weeks ago the levee has been fully saturated and now a ditch is being excavated at its toe.

Every day the ditch is excavated a little deeper and the levee is expected to slide away any moment now. Newly developed monitoring equipment is in place to determine the circumstances that lead to the final breach. 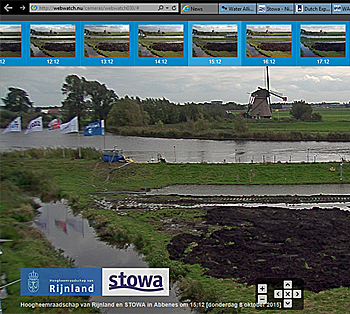 The break down can be followed on live stream.

Participating in the test is the foundation Flood Control IJkdijk that represents a number of companies specialized in levee monitoring.

The fourth company is HKV that developed a dashboard to provide real time aggregated data.

So far the levee behaves as expected. The stress test can be followed on a live stream. 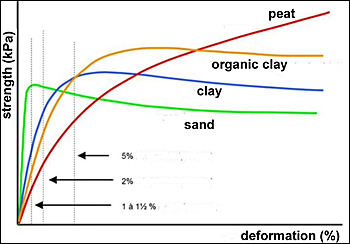 When deformed, peat soil maintains its strength longer than other soil types.

Verifying strength calculations
The stress test is to verify the current set of rules that is used by Dutch levees authorities to calculate the required strength of levees that are built on peat.

Many inland levees in the Netherlands have been constructed on peat and the knowledge on the behaviour of such a layer is limited.

Peat is known for its ability to deform and maintaining its mechanical strength. Yet, little is known about the exact relation between deformation and strength.

Therefore several safety margins are included, when determining the required size of a clay-peat levee.

The stress test is primarily set up to clarify whether the safety margins are sufficient.

Additionally the outcome of the test is expected to reveal new insights on the deformation and strength of peat under extreme circumstances.

Sensor equipment that closely monitors the deformation of the levee.

Four types of monitoring equipment
In recent years several Dutch companies have developed new instruments for the monitoring of levees. These instruments have been applied for the first time at the special facility IJkdijk for testing levee failures.

Several companies took the opportunity to test their new monitoring instruments to measure the deformation of the levee under real circumstances.

Technical University of Delft is present with an instrument to monitor the deformation with ground-based stereophotography.

Watch the dashboard with the aggregated realtime data: Dash board HKV/Floodcontrol IJkdijk.

Below a 3D laserscan of the levee by Intech (green = no movement, yellow = very little movement, red = serious movement).