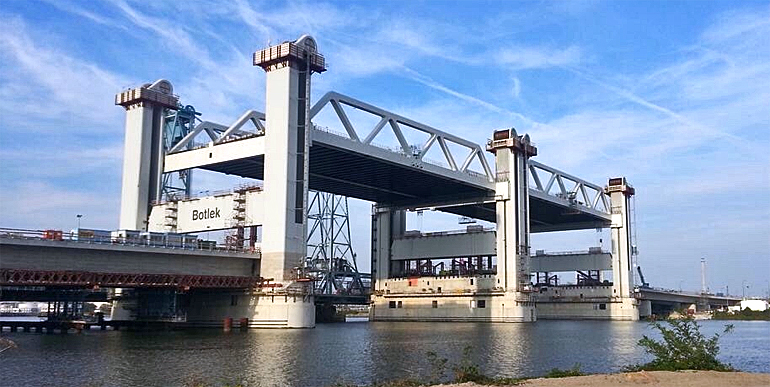 On 12 July the new Botlek vertical-lift bridge was officially opened to road traffic. The first cars passed the bridge in one direction.

The eye-catching bridge with its remarkable symmetrical composition will be fully operational in 2017 with two double lanes and a railway crossing the Old Meuse. It is one of the largest vertical-lift bridges in Europe.

A-Lanes A15 consortium built the bridge and will also be responsible for its maintenance for the next 20 years. 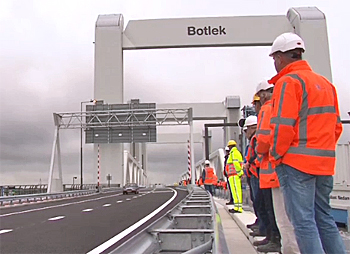 Less frequently opened for shipping
The bridge contributes to a better through flow of both road and water. The sail-through height of the new bridge is 6 m higher so it does not have to open very often.

The shipping traffic can also pass the bridge from both sides simultaneously. Further, the number of lanes per road traffic direction is being expanded from one to two.

Lifting towers and decks
Construction of the 1200 m long bridge started in 2011. It has six lifting towers between which are suspended two bridge decks. 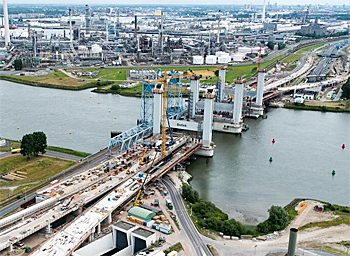 New bridge under construction, next to the old one (on the left).

The two decks are 87×50 m, each with a surface area approaching a football field.

Contracting authority is the national department of public works Rijkswaterstaat.

Impression of the first deck being shipped in on a pontoon from a nearby dry dock on 13 September 2014.