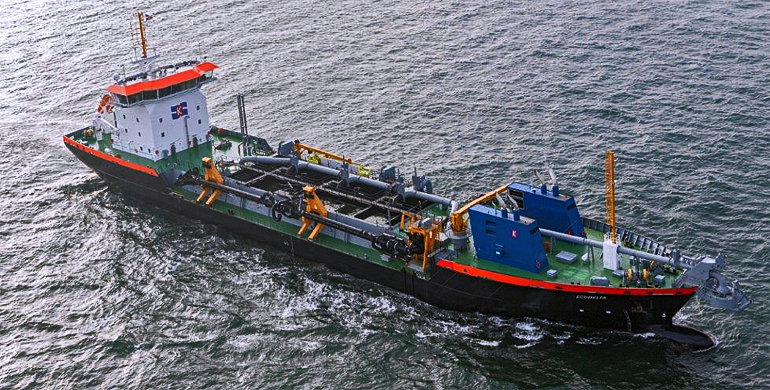 The first dredging campaign in the port of Eemshaven, the Netherlands, started with the LNG powered Ecodelta of dredging firm Van der Kamp.

The Ecodelta is a trailing suction hopper dredger and its engines use natural gas, producing low NOx emissions compared traditional fuels such as to heavy oil and marine diesel oil. The dredger had its ceremony of baptism in Rotterdam on 11 January. 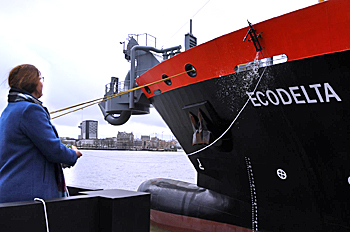 Baptism ceremony in port of Rotterdam on 11 January.

Silted up places
It is the first time that a LNG powered dredger, carries out the maintenance in the Eemshaven. Eventually the entire port will be at the desired depth again. The work is expected to be completed after approximately 1.5 weeks, with the next dredging campaign taking place in October.

Lower NOx-emission
By opting for LNG as fuel, Ecodelta emits 20 percent less CO2 and reduces that of nitrogen oxide (NOx) by 85 per cent. Sulphur and particulate matter emissions are reduced to virtually zero.

The emissions meet the strict standards set by the authorities of the Port of Rotterdam where Van der Kamp will station its Ecodelta most of the time for ongoing maintenance. The ship is 134 m long and has a capacity of 6000 m3.

This news item was originally published on the website of Groningen Seaports (in Dutch only).

Impression of the LNG powered dredger Ecodelta in the port of Rotterdam where it was baptised (Dutch spoken, no subtitles)