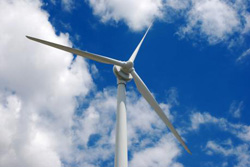 The first full scale demonstration model of the RainMaker AW75 became operational at the Dutch business park Newton Park IV in Leeuwarden. The installation consists of a large wind turbine that captures air in a compressor with a cooling system. This makes the moisture in the air to condensate. After purification the water is collected as drinking water.

The wind turbine produces about 8,000 liters of water a day. It supplies its own energy.

The manufacturer Dutch RainMaker has a pilot installation in operation since 2008 and that is reported to work properly now. 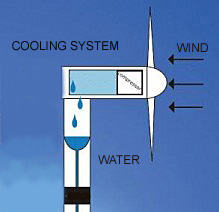 Warm and dry areas
The RainMaker AW75 is primarily intended for agricultural areas in warm, dry areas where little or no water is available such as in Africa. Also the wind turbine may very well be used for drinking water supply in emergency situations when for instance an area that is affected by a natural disaster. Countries that have shown interest in the RainMaker are Kuwait, Suriname, Australia and the USA.

Dutch director of RainMaker, Gerard Schouten, is pleased with the demonstration model in Leeuwarden. "Now we have the RainMaker nearby, we can easily show it to interested parties. And we have the opportunity to further develop the concept nearby."