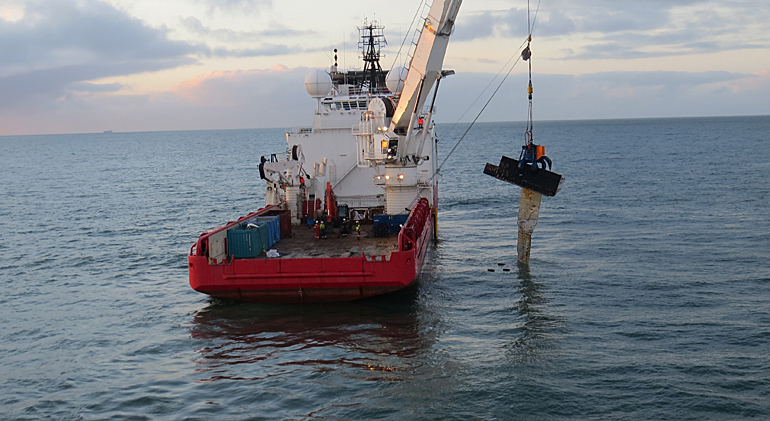 Two multipurpose off shore support vessels, the Geosund and the Atlantic Tonjer, have been chartered by container line Mediterranean Shipping Company (MSC) to raise sunken containers from the bottom of the North Sea and bring them to shore. MSC’s mega container ship Zoe lost 291 containers off the Dutch coast in a storm on the night of January 2.

Following a few days delay because of bad weather, the salvage operation commenced on 18 January. Geosund and Atlantic Tonjer managed to recover the first containers and other debris. MSC has pledged to bring all containers to shore, but this will prove difficult as many containers are expected to have been heavily damaged when they fell. 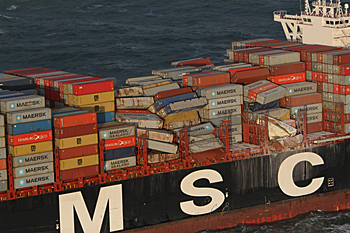 Havoc aboard MSC Zoë on the morning after the storm, photographed by the Dutch coast guard. Of the 8,000 containers aboard, 291 had fallen off.

Cleaning up shores
Immediately after the incident debris started to wash up the barrier islands on the Dutch northern coast.

It took local water authorities, nature conversation group, military and many volunteers several days to clean up the beaches. This included the recovery of 18 containers that did not sunk immediately and washed up on the shores.

Meanwhile the Dutch national water authority started a search operation to localise all the containers that had sunck. This has been successful for 220 containers, meaning that at the moment 51 are still missing.

Around the clock
The crane grippers aboard the Atlantic Tonjer and Geosund are working around the clock to pick up any debris from the 25 to 30 m deep sea bed on the given locations. 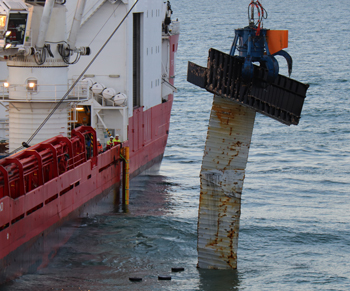 One of the first containers picked up from the sea bed by the crane gripper of the Geosund. Visible on the side of the ship is the echo device (vertical yellow bar) that assists the crane operator to position the gripper more precisely.

The salvage operation first concentrates on a hot spot, some 20 km of the coast of the Dutch island Terschelling, where over 100 containers have been localised.

Both ships have been equipped with an echo device that assists the crane operator to position the gripper as accurate as possible over the detected debris.

Currently sixteen ships are involved. Next to the Atlantic Tonjer and Geosund, the fleet includes guard and survey vessels.

Supply vessel Blue Bella shuttles back and forth, taking the recovered debris to the shore. This enables both salvage ships to continue their work.

Time pressure
The whole operation is under time pressure as the heavy containers will slowly sink into the sandy sea bed to be fully covered up by sediment.

The shipping company MSC assumes that it will take three months until all containers are salvaged, but in the worst case, it could also be six months.