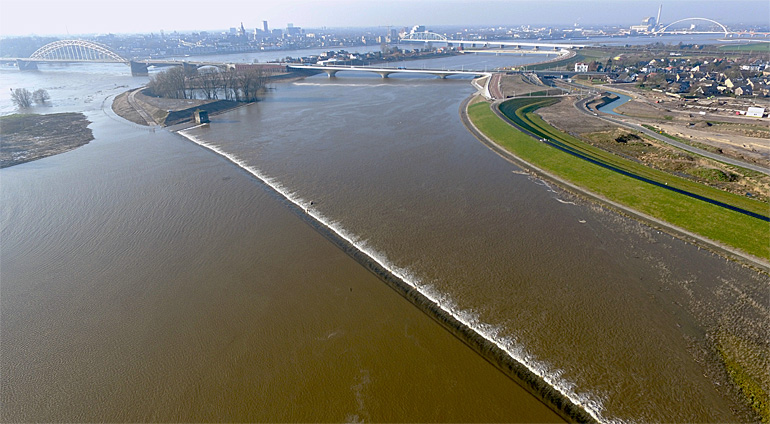 The river Rhine has overtopped the threshold of the 3,5 km long flood relief channel Spiegelwaal, near Nijmegen, the Netherlands for the first time on 12 February.

High river discharges made the water level to rise above the height of the special constructed threshold. For three days the river flowed through the relief channel along the river Rhine (Waal).

The flood relief channel was specially constructed as part of the national Room for the river programme to be prepared for the passage of an extreme discharge up to 16.000 m3/s without causing river floods. 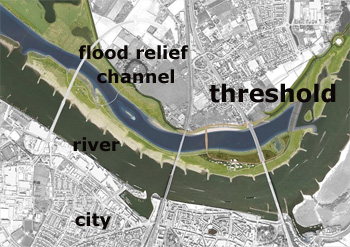 Scheme of the Spiegelwaal as constructed on the north side of the river Rhine (Waal) and its threshold on the right.

Iconic river project
The construction of the flood relief channel at Nijmegen is seen as the most iconic of all 30 projects of the Room for the river programme that have been realised along the river Rhine between 2005 and 2015.

To be able to allow a larger discharge to pass the bottleneck at Nijmegen, it was decided not heighten the river levees, but to move them 350 m inland. This created room for a 3,5 km long flood relief channel.

Most iconic about the project is how the channel has been designed to fit into the landscape. On the island between the main river and the channel, a dynamic river park and a water front has been created for citizens to recreate.

Three new bridges connect the island to the city. 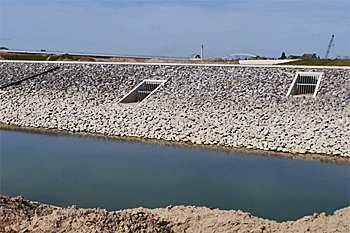 Asymmetrical threshold
The threshold at the beginning of the side channel is the main hydrologic precondition for the functioning of the flood relief.

It has been constructed asymmetrical with coarse on the upstream side and a smooth finish on the side of the channel.

At high water the threshold can overtop without causing erosion. It has been designed to overtop with an average of 11 days per year.

Visitors from all over the world
Construction of the Spiegelwaal started in 2013 and till recent it has been the playground of excavators and cranes.

In itself it had become an attraction, drawing around 30,000 visitors from all around the globe.

Overtopping of the threshold at the entrance of the Spiegelwaal.