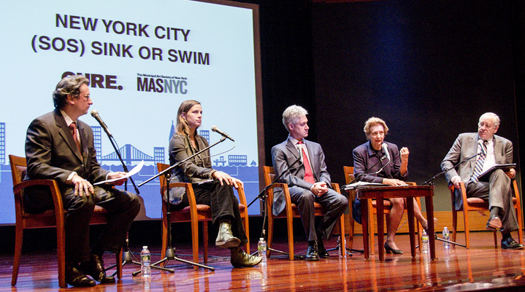 "In the Netherlands we were amazed by all the media attention on our storm surge barriers just after superstorm Sandy. We loved the attention but I can assure you we are not promoting barriers for New Jersey", said senior advisor Dale Morris (top photo in the middle) of the Royal Netherlands Embassy in Washington at the conference New York City: Sink or Swin on December 13th.

"Storm surge barriers provide a tremendous amount of protection but are expensive to build, and even more expensive to maintain. Mind you, you are buying a Ferrari", warned Morris.

The conference was hosted by the Center for Urban Real Estate (CURE.) of the Columbia University and by the Municipal Art Society (MAS) and involved Dutch water experts to talk about a long-term strategy for a rebuild of New York and the Jersey coastline, following the devastation wrought caused by superstorm Sandy after it made landfall on October 30th. 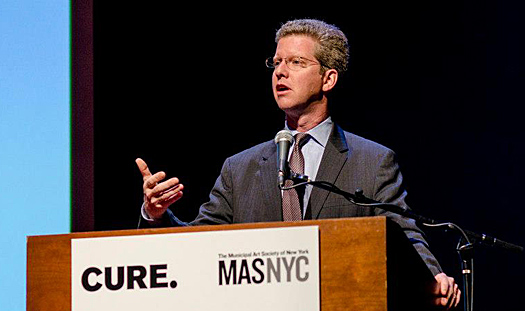 State secretary Shawn Donovan of Housing and Urban Development attended the conference and gave his fresh views on a long-term rebuild strategy including flood risk reduction.

Donovan was recently appointed by president Obama as head of the Hurricane Sandy Rebuilding Task force. Two of his major tasks will be the multi- agency coordination and the supervision on the 60.2 billion dollar Federal Hurricane Sandy emergency aid package.

"The immediate help is still our main focus, but we have to look at the future too and develop a long term vision for the whole region. We must not blindly rebuild what was there. Homes that wash away and substations in flood zones, must become a thing of the past," Donovan said.

More cost effective
Donovan explained that president Obama has given him six month to develop a long term redevelopment plan. He sees his role as a federal coordinator, facilitating all local stakeholders to come up with a joint visionary plan to limit the impact of future disasters.

"We need to rebuild smarter and more resilient. That may be more expensive but it is more cost effective", said Donovan at the conference. He referred to previous natural disasters showing that cities that took protective measures, suffer less damage.

Dutch dialogues in New Orleans
According to Dale Morris of the Royal Netherlands Embassy, storm surge barriers are very controversial. "In the Netherlands they have a role and they provide the Dutch people much safety. But it is not only about barriers. It is also about spatial planning. People like to life near the water and that creates value."

"Engineers and city planners work together on a water plan that shows where the storm water goes. This is how they do it in the Netherlands where cities have to develop such a plan and the water boards have the power to assess whether the plan is appropriate." 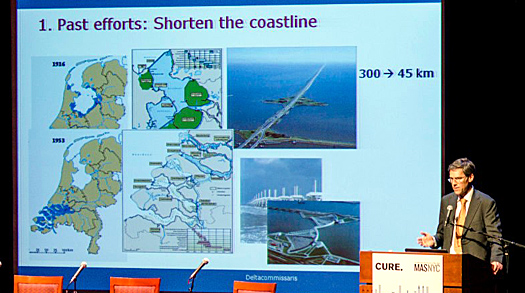 Jos van Alphen, special advisor of the Delta Commissioner in the Netherlands, explained in his key note the Dutch 'Delta approach'. He stressed the importance of multi-layer flood risk reduction which, in addition to prevention, also urban and spatial planning is relevant to the protection and reducing risks.

Another important element to combat water inundation, mentioned by Van Alphen, was the concept of 'retain, store, and drain' storm water. Recent experiences in The Netherlands show that the concept creates great opportunities for urban design and infrastructure.

Birch remined of the flood risk zoning that is in place. "We only incorporate hazard mitigation measures in order to get money from FEMA. We do not work with the zoning because we want to. And there is no monitoring on the measures at all. This is often how city planning happens."

"We have to decide where to put our money", Birch stated, "If we build dunes to protect the hard infrastructure, it is fine. If we cannot provide a certain protection level, we must use the money to compensate those folks to be able to protect their own properties or move to other, less flood prone areas."

According to Orff there is still too much attention for hard infrastructure. She advocated eco-engineering, merging hard and soft options such a beach replenishment, reef rebuilding, salt march restoration together with building barriers. An additional benefit of this merge, Orff mentioned, is the improvement of the water quality.

Sink or swim part 1 of 4: including key note by US secretary Shaun Donovan of Housing and input panelists

Sink or swim part 2 of 4: including key note by Dale Morris and an interesting panel discussion on modern urban flood management.

Sink or swim part 3 of 4: key note by Jos van Alphen on the Dutch Delta Approach.