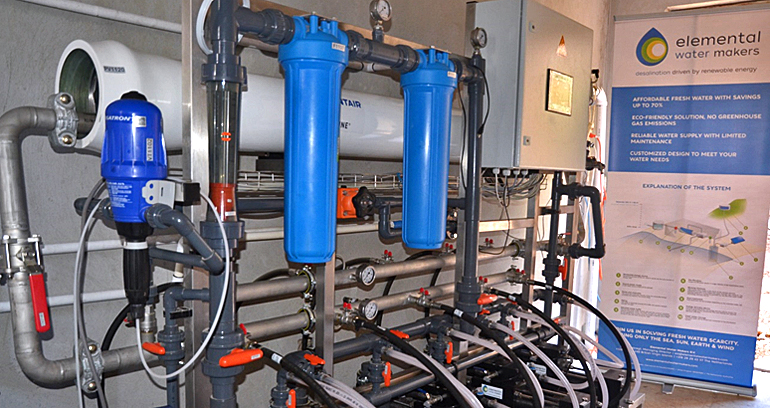 Elemental Water Makers has delivered its first solar-driven desalination plant for the production of drinking and irrigation water for a private house owner on one of the British Virgin Islands in the Caribbean Sea.

The solar energy drives a reverse osmose process to desalinate sea water without the use of batteries. The smart designed energy source makes the production of fresh water reliable and cost effective

The installation has a capacity of 12.500 liter per day and was officially commissioned on 18 July.

Overcoming constraints of fluctuating energy source
The Virgin Islands are the first to use this desalination installation that has been developed by Dutch clean tech company Elemental Water Makers.

Vollebregt: "The commonly used and most energy efficient technology of reverse osmosis is designed for constant operation, while renewable energies such as the sun and wind fluctuate over time. As a result of the required use of batteries or operating discontinuously, existing alternatives are expensive. Elemental Water Makers solves this problem". 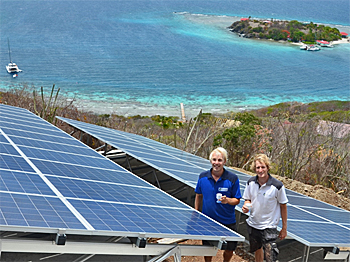 Founders Sid Vollebregt (left) and Reinoud Feenstra at the solar panels of their installation on the British Virgin Islands.

Pressurised sea water
The young company from the Netherlands, founded by two engineers from the Technical University of Delft and part of incubator YES!Delft, constantly converts seawater using only fluctuating renewable energy source.

"A constant reverse osmosis process is enabled by using the power of gravity through a salt water buffer installed at a higher level of elevation”, explains Vollebregt.

"The pressurised sea water directly flows to the reverse osmosis membranes. The elevation level required is greatly reduced by re-using the excess pressure in the salt water flow, making use of a mechanical form of energy recovery."

Important milestone
Vollebregt reflects on the importance of their first desalination plant on the Virgin Islands. "We are very pleased to have reached this next important milestone for our company which shows that we can solve fresh water scarcity, using only the sea, sun, earth and wind. There's much interest from resorts and private household owners in the surroundings, who we will now be able to physically demonstrate the system to and have them feel and taste the water. We are also discussing to arrange the water supply of an entire village with the municipality in Cape Verde, which we expect to install later this year."

The technology is scalable from a few thousands liters of water per day up to a scale of a million and Elemental Water Makers expects many after-sales at resorts and private home-owners in the region and it will be talking to governments to enable a sustainable fresh water supply of entire islands.

Through a real-time monitoring portal, the water production and solar energy used on the Virgin Islands can be watched online from anywhere around the world.