On May 24, local community events will be taking place at 257 locations worldwide to celebrate the first World Fish Migration Day.

The common theme is connecting fish, rivers and people.

Headquarters for the World Fish Migration Day 2014 is located at the regional water authority (AGV) of Amsterdam, the Netherlands. Here the world wide event will officially be launched on May 23. 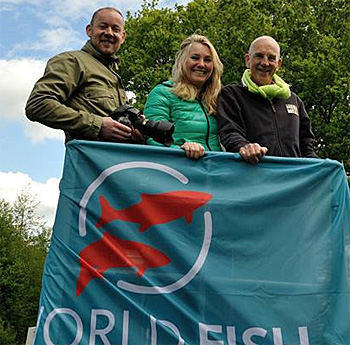 Coordinator of World Fish Migration Days is Herman Wanningen (left), here seen while promoting the international Fish Passage Conference 2015, which will be organized on 23-25 June 2015 in Groningen, the Netherlands.

Many inaugurations of fish passages
Many exciting events have been planned, as Herman Wanningen, the Coordinator of World Fish Migration Day, explains, "Event organizers around the world are hosting inspiring activities, including the celebration of the removal of a dam in Japan, a fish way tour in the Kruger National Park and the inauguration of over 20 new fish passage facilities around the globe."

Wanningen is very pleased with the global response to the initiative. "The need for clean and healthy rivers is felt worldwide. People have had enough of unrestrained constructions of more river blockings. Clearly, structure and strategy must come in for natural river networks to remain connected, before it is too late."

Migration crucial to reproduction
Dams, weirs and sluices built for water management, hydropower, irrigation and land drainage disrupt the natural flow of rivers and can prevent fish migration. Many fish need to migrate to reproduce, feed and complete their life cycles.

Migratory species are a crucial link in the food chain and play an important ecological role in productive river systems. Giant catfish, sturgeon, eel and salmon are just some of the famous migratory species under human pressure.

"World Fish Migration Day is a terrific way to draw attention, not only to the significant challenges that fish face in reaching their habitats, but also to the many successes we've had in restoring their journeys," says Giulio Boccaletti, the Managing Director of Global Freshwater for The Nature Conservancy. 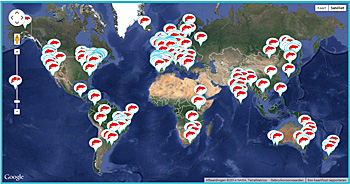 Over 257 events will take place, on all continents.

Importance of free-flowing rivers
Mr Boccaletti continues: "The day and its events throughout the world also point to the many ways needs of people and communities are tied to the success of migrating fish. By safeguarding the life cycles of fish, we're also empowering people and their communities."

"Migratory fish like salmon, sturgeon, giant catfish, as well as millions of people worldwide, depend on ecologically important rivers such as the Danube, Yangtze and Mekong. Unfortunately these essential lifelines are severely under threat from dams, over-fishing and pollution. Wouldn’t it be wonderful if WFMD became as popular as EarthHour; ushering in a wave of worldwide events focusing attention on the importance of free-flowing rivers.’"

Alarming increase river flow disruptions
Johan van de Gronden, CEO World Wide Fund for Nature in the Netherlands, compares the river to the human body:
"Most heart attacks are the result of a blockage of arteries; blocking or disrupting river flows have the same effect on the planet as they do in the human body, unless we are becoming much more proactive in addressing the alarming incremental pace of river flow disruption, we are likely to give the planet a heart attack with seriously crippling and devastating consequences for all life on earth!”