Dutch cities of The Hague, Dordrecht, Gouda, Rotterdam and Zwolle signed the City Deal on climate adaptation to create a learning environment for urban climate adaptation. Other parties to participate in the deal and supporting the cities are national and regional authorities, knowledge centres and companies.

All parties agreed to foster innovative ideas and bring these jointly in to practice to make cities more resilient to extreme weather events. The cities involved are in particular vulnerable to floods.

The City Deal was officially signed in Zwolle, the Netherlands on 9 March. 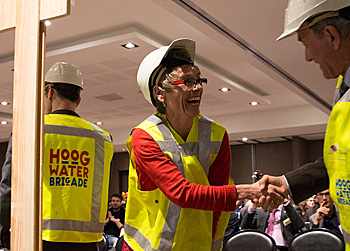 Adaptation on a routine bases
Many cities regard climate adaptation in isolation from other issues. The City Deal advocates an inclusive approach.

According to CEO Annemieke Nijhof of the consultancy firm Tauw who also signed the deal, many techniques and solutions are already available. "The challenge is to adapt these on a routine bases working in the public areas", said Nijhof on the occasion.

"When constructing a road, a park or new buildings, one has to make sure this infrastructure can absorb or reduce extreme rainfall, long periods of drought, heat and cold. The City Deal focuses on this integrated approach with the aim to improve the quality of life in our cities for the future. "

"It is about big and small projects to raise the urban resiliency against heat waves and extreme rainfall", Nijhof continued. "I hope this cooperation will inspire these cities to find new, smart ways."

One particular way she mentioned, was the introduction of 'value spotting'. "The living environment has several values, such as comfort, esthetics, sustainability. These are values that can be leading in optimising the urban environment." 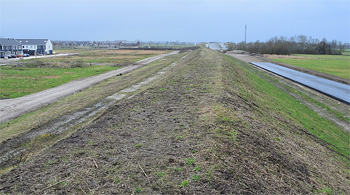 The new ring road (right) is under construction and the earth berm (middle) is to reduce the traffic noise and to protect the housing area (left) against floods.

Noise barrier as additional flood defence
A good example of an innovative solution for climate-proof cities, is the diminishing of traffic noise in Zwolle's district Stadshagen, the Netherlands.

A new ring road is being constructed and a large earth berm is to reduce the traffic noise. The noise barrier has been constructed in such a way that it also functions as a flood defence.

This multifunctional earth berm adds to the flood prevention of the many river levees that surround the city of Zwolle.

The city of Dordrecht is also surrounded by many rivers and may learn from this multi-functional approach in the city of Zwolle.

.. and also hands-on for director Lennart Silvis (left) of the Netherlands Water Partnership.

Living labs worldwide
The City Deal fits the growing belief that a central guided urban development is impossible without engaging the stakeholders at an early stage. Worldwide initiatives like the City Deal are emerging, often referred to as living labs.

Director Lennart Silvis of the Netherlands Water Partnership (NWP), one of the parties to sign the City Deal, emphasised this international development.

On the occasion of the signing of the deal he showed examples of the Rebuild by Design programme in New York and the Urban Water Strategy project in Gdansk, Poland. 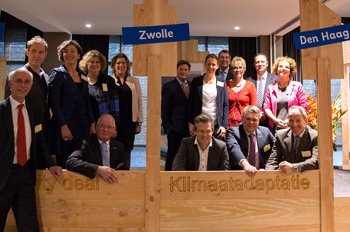 European climate adaptation policy
"The concept of living labs is important as it shows the innovations and inspires cities", said Silvis.

He advocated an international knowledge exchange with cities outside the Netherlands. "This can be as simple as on how to organise a campaign to reduce run off and introduce permeable pavement."

Silvis also referred to the City Deal in the context of the European union's policy on resilient cities and the efforts by the Dutch government - as one of the priorities of the current Dutch EU presidency - to come to an agreement on an European climate adaptation policy, following the Paris agreement in December last year.

Viable Dutch cities
The City Deal on climate adaptation is part of the 'Agenda Stad', a cooperation of the central Dutch government, cities and stakeholders aimed at enhancing growth, innovation and viability of Dutch cities.

In December the first City Deal was signed on the development of a roadmap for the next economy. The City Deal on climate adaptation is the second one and a dozen more are in preparation to be adopted, on subjects as sustainable energy, healthy cities and clean technology. 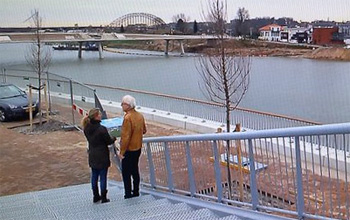 By engaging in the national Room for the River project, the city of Nijmegen got itself a new river crossing, a park and a nice looking river boulevard.

Less regulation, more co-ownership
The deals prelude on a single Environment & Planning Act that will come into force in 2018. The act combines several existing Dutch laws related to spatial planning, including the acts on nature conservation and water.

The new act is to bring less regulation and to create more room for regional stakeholders to jointly work out region specific development plans.

The early stakeholder involvement has proven successful in the  Room for the River programme that included over 30 projects along the river Rhine to increase discharge capacity.

Although under the central control of the Dutch national water utility Rijkswaterstaat, the individual projects involved many municipalities, citizens and local interest parties.

The City Deal engages the five participating cities and the supporting parties to take their share in the National Delta Programme that envisions a resilient and flood-proof water system in the Netherlands by 2050.

This news item is based on original publications on the websites of 'Agenda Stad' and Water board Drents Overijsselse Delta (in Dutch only).