On 21 January US Department of Housing and Urban Development (HUD) Secretary Julián Castro and the Rockefeller Foundation announced the 13 winning projects of the 1 billion dollar National Disaster Resilience Competition (NDRC).

Contrary to a standard funding in the USA for damage repairs after disasters, these projects envision a better preparedness for future disasters. Stakeholder participation, co-financing and involvement of landscape architects are other typically Dutch elements of urban planning.

The concepts of the competition followed the model of the Rebuild by Design competition that has been set up in 2013 by the Dutch special advisor Henk Ovink who was part of the Hurricane Sandy Rebuilding Task Force. 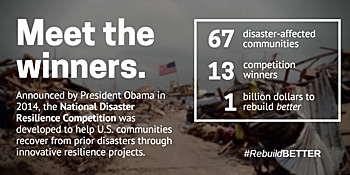 The other two projects involve consultancy firm Arcadis. It is one of the lead partners for a project in the city of Norfolk that struggles with sea level rise, subsidence and recurrent floods. Other Dutch partners involved, are Delft University of Technology, consultancy firm HKV Water and architect firm OMA. The project is granted 120.5 million US dollar.

Arcadis is also involved in the winning project by the city of New York. This project concerns a number of specific sites on the lower east side of Manhattan within the overarching framework of the BIG U project, now known as Dryline. The project is granted 176 million US dollar.

All 13 projects will be subject to an open tender for contractors. 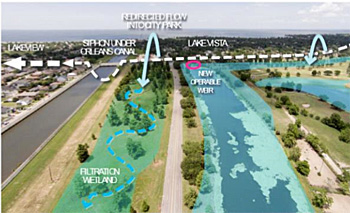 A green park as planned in the winning New Orleans project

Distinct Dutch approach
Some 70 states and communities that had been hit by a disaster between 2011 and 2013, had entered to NDRC competition and all filled a project that provided a long term view on disaster risk reduction, was jointly drafted by stakeholders and was linked with other development plans to improve the livelihood in the neighbourhood.

"Instead of just rebuild what was there before, the competition made the states and communities to think more creatively", explains Dale Morris, senior economist at the Royal Netherlands Embassy in Washington.

Morris has been closely involved in the competition and emphasises the tremendous Dutch influence in these projects. In particular, he mentions the climate adaptive approach that focusses on disaster prevention, and on the involvement of many stakeholders right from the start.

"This is a distinct Dutch approach to urban planning", says Morris. "Also the involvement of landscape architecture shows the Dutch influence in these projects".

According to Morris both this competition, and the previous Rebuild by design, makes it possible for the federal housing department (HUD) to break away from the silo-ed planning. "Many federal programmes are tightly controlled and restrictive in how funds can be used. These competitions break that mold and the White House supports the creation of these new ideas."

Workshops with stakeholders
Morris was one of the organisers, together with local architect David Waggonner, of the Dutch Dialogues that took place in New Orleans between 2008 and 2010. "Based on several workshops with local stakeholders, a Dutch-US team drafted an urban water plan for New Orleans. Norfolk asked our help to start a similar bottom-up process so they could make a strong application for the NDRC competition."

So the successful concept of the Dutch Dialogues was brought to the city of Norfolk. "We co-organised a similar workshop to flesh out their plan. Just as in New Orleans, a number of Dutch experts proofed crucial for the gathering of all the knowledge", Morris points out.

The particular areas (white dots) that will be detailed as part of the overall Lower Manhattan protect and connect project.

Longterm social-economic development
Edgar Westerhof, US flood risk & resiliency lead of Arcadis is delighted that his firm has been an advisory in two winning projects that have been awarded with a total of 296 million US dollar. "To some extend we have also been involved in the project by New Orleans and Connecticut", he adds.

"This money has been granted to the disaster-hit areas in addition to the regular short term emergency response", Westerhof explains. "With the two competitions the housing department provokes the states and the local communities to think about their future and the social-economic development. The US is well organized on reactive disaster response. The competitions made them think of the future and long term planning for smart investments."

Ministry of Infrastructure and environment
The Hague, the Netherlands
+31 70 456 00 00
www.government.nl/ministries/ienm