In the Dutch port of Den Helder, the fouling of the marine vessel was removed by using Fleet Cleaner’s special designed remotely operated robot.

In March this year the company expects to launch a ship hull cleaning facility in the port of Rotterdam. This service will be offered by OH Ship Cleaning. 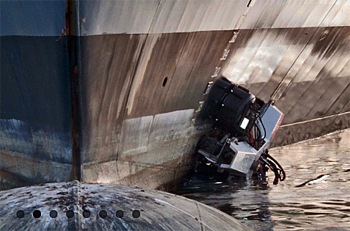 The robot with its three domes scrubbing the hull with water. The removed fouling is collected.

Under and above water
The cleaning of the HNLMS Karel Doorman was unique since both under and above water cleaning was performed by the scrubbing robot. Due to loading and unloading, up to 20 percent of the fouled surface can be above the waterline in port.

The robot is able to clean a vessel during loading and unloading in ports. Due to the use of controllable high pressure waterjets, the coating is not damaged during the cleaning process.

According to Fleet Cleaner this has been confirmed by coating experts during the Karel Doorman cleaning with several coating measurements.

All removed fouling is captured by the robot and filtered by the support system, resulting in an environmental friendly hull cleaning solution.

Star-shaped robot
With a diameter of 1.80m and a sturdy steel frame, the robot can stand up to the heavy work for which it was designed.

The star-shaped frame supports three domes with rotating water jets, which spray the deposits away from the underside, while powerful magnets hold the machine against the hull.

An operator controls the robot from the shore or from another ship, which also collects and purifies the dirty water.

This news item was originally published on the website of Fleet Cleaner.