Large ecosystems, such as tidal marshes and mangroves, can improve the protection against increasingly severe flooding in many places throughout the world.

In comparison with conventional flood-prevention methods, this ecosystems are more resistant to climate change, in addition to being more cost-efficient and having many additional social benefits.

A Flemisch-Dutch research team wrote this in an article in Nature entitled 'Ecosystem-based coastal defence in the face of global change'. The article was published by the University of Antwerp, in cooperation with the Royal Netherlands Institute for Sea Research (NIOZ), IMARES Wageningen UR, TU Delft and Ecoshape.

Creation of new tidal marshes
The researchers based their plea for more global applications on research conducted in Flanders and the Netherlands. One of the methods investigated involves tidal marshes. These ecosystems occur naturally along coasts and estuaries, but they can also be built by moving dikes inland or by using locks to diminish the tidal action flowing into the polders. 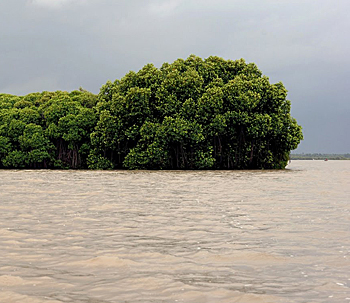 Natural flood protection
During storm surges, large volumes of water volumes are contained in these new tidal marshes, thus reducing the risk of flooding in the densely populated inland areas.

The researchers also used geological and biological processes to demonstrate that tidal marshes raise themselves along with the rising sea level. These ecosystems thus act as natural dams that maintain themselves and adapt to climate change.

Many other benefits
Tidal marshes also provide additional social benefits. For example, they are essential growth sites for commercially interesting types of fish and shellfish; they contribute to the natural water purification of rivers and coastal areas; they can compensate for the concentration of harmful greenhouse gases; and they offer opportunities for recreation and to experience nature.

Limitations: more space and long period to establish
Despite the many benefits and advantageous applications in many critical regions throughout the world, there are also a number of limitations. The construction of large ecosystems requires more space than the construction of classic dams. In addition, experts currently have much less experience with these methods, and it takes several years for an ecosystem to become well established.

This news item was originally published on the website of Delft University of Technology and NIOZ.