Dutch-based design and construct company for floating foundations FlexBase, will soon start the construction of a floating platform in Laguna Lake, near Manila, the Philippines.

Laguna Lake is a 95,000-hectare freshwater lake, south of the Philippine capital of Metro Manila, and is home to an aggregate population of close to 15 million people. The banks of the shallow lake flood regularly (see photo above).

The floating platform will include some low-cost homes, next to a conference center and an information center. 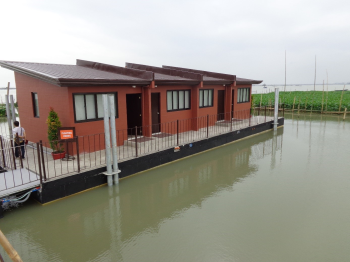 The start of the project in Manila is the first realization of the concept.

The driving force behind the floating project is Philippine senator Cynthia Villar. During the Delta Conference 2014 in Rotterdam, the Netherlands, she held a keynote speech on the problems in her country, especially by flooding and its consequences for the urban poor.

Poor citizens often live in areas that are regularly flooded after heavy rainfall during typhoons. Such floods are becoming more frequent and more powerful. Instead of relocating the citizens, the concept of floating homes allows them to stay close to home and can continue to live.

Resistant to typhoons
FlexBase and Royal HaskoningDHV were asked for the structural design of both the pontoons as well as to take care of the mooring facilities. Important condition is that the whole concept  is resistant to wind and wave forces generated by typhoons.

The realisation starts in mid-October. The whole project is planned to be ready by the end of this year. 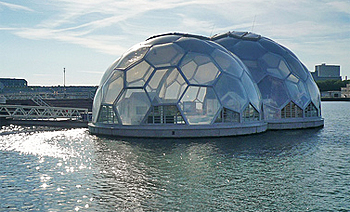 The renowned floating pavilion in Rotterdam, the Netherlands is build on an EPS-platform by FlexBase.

Light weight construction
The design of a floating platform by FlexBase is based on expanded polystyrene (EPS) which makes it unsinkable. Moreover, EPS is waterproof and does not leach out or degenerate.

Two existing references of EPS constructions are the floating pavilion in Rotterdam and the floating greenhouse in Naaldwijk, the Netherlands.

About FlexBase
FlexBase designs and implements floating foundations used to build on the water in a wide variety of applications for living, working and recreation.