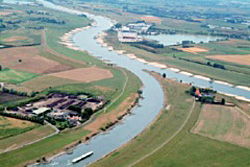 Advanced Real-Time Control (RTC) of hydraulic structures is one of most cost-effective non-structural measures for improving the performance of complex and interconnected river and canal systems such as the delta of the rivers Rhine and Meuse in The Netherlands. Exploiting synergies of integrated control of hydraulic structures in combination with predictions about future system states enable so-called predictive control. The technique enables a holistic consideration of control objectives such as flood mitigation, cost-effective pumping, or optimized hydropower generation.

Software for control of hydraulic structures
According to Dirk Schwanenberg, project leader of the Flood Control 2015 programme, predictive control has been the focus of several projects conducted by Deltates and HKV and other partners, in recent years. This resulted in the development of the 'RTC-Tools' software, an Open Source package for reactive and predictive control of hydraulic structures.

Split up points of rivers and flood detention basins
Within the FC2015 programma, the software was applied to the control of the bifurcation points of River Rhine. More recently, the software has been used for controlling flood detention basins of the two Dutch water boards during recent flood events. For another water board pump schedules are controlled in an optimum way, where the main objectives are flood mitigation and pump costs.

Next generation software
Within the new modular design of Deltares’ next generation software, RTC-Tools will replace existing real-time control functionality in modelling packages such as SOBEK. Furthermore, the software has been applied successfully to international consultancy projects.

Modelling upper Rhine
Examples include the modeling of the upper Rhine between Basel and Maxau with sophisticated reactive control policies and decision-support on the management of the Salto Grande hydropower plant at Rio Uruguay, on the border of Argentina and Uruguay.