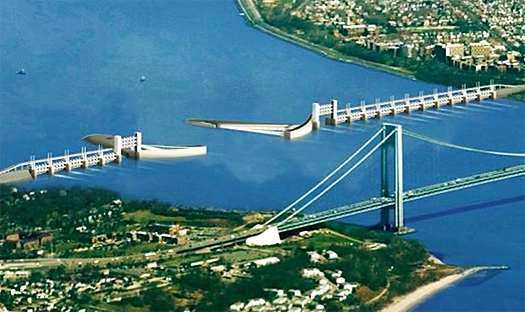 The City of New York shall have to reconsider its flood defence system. In the aftermath of superstorm Sandy many flood experts have reacted in the media discussing the need of a storm surge barrier, both specifically for New York and in general for coastal cities.

The city has been hard hit twice within a year and the enormous flood damage puts the construction of an expensive storm surge barrier in a new perspective.

New York City has published in March 2011 its 'Vision 2020: New York City Comprehensive Waterfront Plan', giving a 10-year vision for the future of its 520 miles of shoreline. The plan does not foresee the construction of a storm surge barrier.

Experts believe that New York will set a trend for other coastal cities as it comes to selecting adequate measures. Both Dutch flood experts Bas Jonkman and Ellen Tromp suggest New York also to consider multi-functional levees. Cities as The Hague and Rotterdam have recently completed flood protection projects with levees succesfully integrated in the urban surroundings. 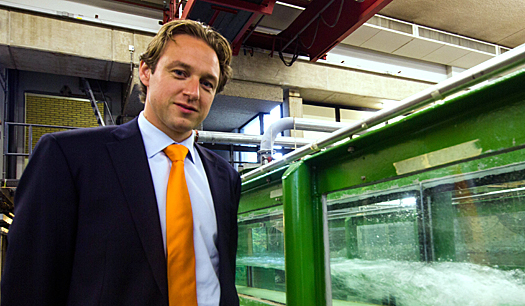 The enormous damage caused by superstorm Sandy is a good reason to seriously consider protecting the New York area by means of a storm surge barrier or other flood risk reduction measures, concludes professor Bas Jonkman of the Technical University of Delft in his reaction on the website of The New York Times.

Jonkman has done flood risk management research and consulting in the Netherlands, Vietnam, Cambodia, Indonesia and Romania. At UC Berkeley he worked on the Resin project that focuses on risks and vulnerability of infrastructure in the Sacramento San Joaquin delta. 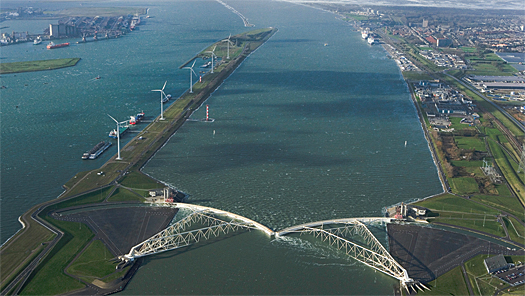 Closure of the navigable Maeslantkering barrier reduces the flood risk for the city of Rotterdam in the event of a storm surge from the North Sea.

Effective in protection of large hinterland areas
In his reaction he claims these great engineering systems have proven to be effective in protecting large hinterland areas. However, Jonkman also warns for the potential negative effects: the construction and maintenance costs of barriers are high – often billions – and there might be adverse effects for navigation and the environment. The city, state and nation must carefully evaluate costs and benefits of various strategies, such as flexible flood defences in low lying areas and flood proofing of tunnels, he writes on the website of the New York Times.

Always trendy New York
Jonkman is convinced that New York's reaction, will be relevant for other flood-prone regions in the U.S., like the Houston-Galveston region and Sacramento, as well as deltas in other parts of the world. "Having faced this for generations, the Dutch are eager to share their global experience in the planning and design of effective systems to reduce storm surge risk", he concludes his comment.
(read the full contribution by Bas Jonkman on the website of the New York Times
. 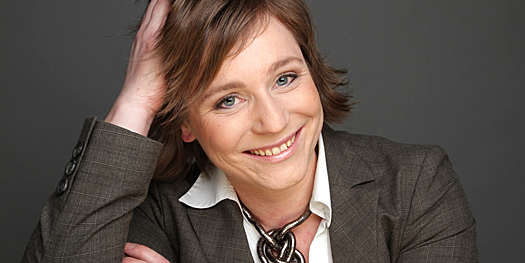 A storm surge barrier will have great impact on the city's waterfront plan and Tromp draws a comparison with Rotterdam's navigable storm surge barrier Maeslantkering. Tromp explains that this excisting barrier reduces the impact of a storm surge coming in from the sea. However, levees are still needed in the city itself, but they can be lower and therefore much better integrated in the urban surroundings. According to Tromp this is an important dilemma for New York to resolve.

Urban development including water defence
Tromp advocates multifunctional water defence as an effective and sustainable solution, particularly for major coastal cities like New York, which have to utilise every inch of space. It is also in line with the city’s vision of focusing on the sea and including water in urban development rather than trying to work round it. "A good example of one of the multifunctional water defences that Deltares worked on is the coastline of The Hague. It was achieved by combining dike reinforcement with the redevelopment of the coastal boulevard".

Increasingly popular in cities
Tromp notices that these kind of flood defence systems are becoming increasingly popular in major cities, including in London, Sydney and Melbourne. "What’s more, in the long term a multifunctional water defence is a cheaper option than many other hydraulic solutions, like a storm surge barrier, for example", says Tromp.

She is looking forward to attend a workshop in New York next year about multifunctional water defences, where the participants will exchange knowledge and experiences on combining water safety with urban development. 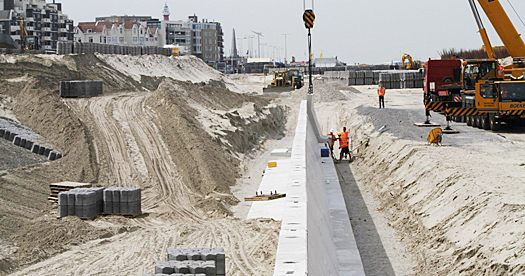 Recent raising of a flood defence wall as part of an redevelopment project of the coastal boulevard of The Hague, the Netherlands 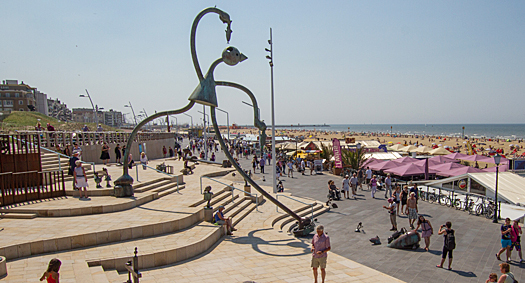 The current view of the coastal boulevard of The Hague after the underground flood wall has been raised to meet future sea level rise. 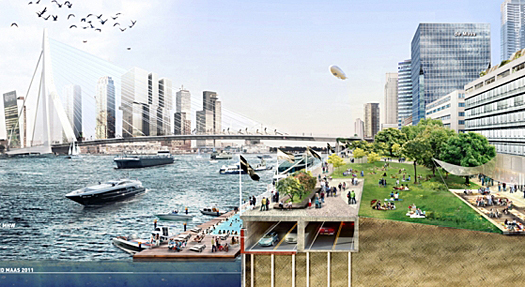 A series of top events on flood risk reduction will take place in Rotterdam, the Netherlands from 19 till 23 November. Three international conferences will be held in conjunction: