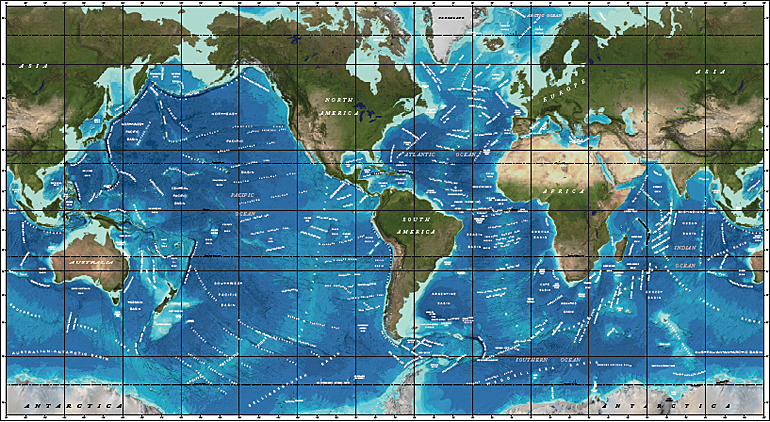 The Seabed 2030 project is being facilitated by the General Bathymetric Chart of the Oceans (Gebco) project, in partnership with The Nippon Foundation (NF).

The operational launch of Seabed 2030 was in Tokyo, Japan on 20 February. 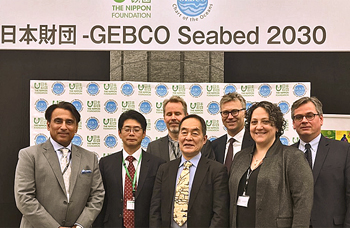 Initiators of the Seabed 2030 project in Tokyo, Japan on 20 February, including project director Satinder Bindra (left) and David Millar of Fugro (right).

The company has recently expanded that collection capacity to include four survey vessels and intends eventually to incorporate the approach across its entire global survey fleet.

‘In the coming months we look forward to receiving more transit data from all its survey vessels, which we believe will serve as a shining example to others in the industry and play an important role in helping us map the entire ocean floor for the benefit of humanity by 2030’, Bindra added.

Integrating datasets
Fugro is also working with its clients to investigate how their datasets may be incorporated into the Seabed 2030 project whilst ensuring the integrity of their data.

In a complementary initiative it is also helping to establish a workflow for integrating third party datasets into the overall project database, addressing such things as data formats and metadata standards. 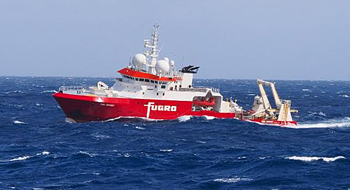 Fugro's survey vessel Discovery encounters rough conditions in the Southern Indian Ocean when searching for the missing Malaysia airline flight MH370 in 2015 and 2016.

Good ocean stewardship
‘We are proud to continue our support of Seabed 2030 and to lead industry participation in this way’, said David Millar, Fugro’s government accounts director in the Americas.

‘As an appreciable portion of our work is ocean related, Seabed 2030 provides a perfect opportunity for us to contribute to global society and practice good ocean stewardship.”

Much less than 20 percent of the world’s oceans are mapped using modern survey techniques and Fugro recognises the importance of accurate seabed measurements (bathymetry) to numerous government, scientific and industry applications.

About Seabed 2030
Seabed 2030 is a collaborative project between General Bathymetric Chart of the Oceans (GEBCO) and the Nippon Foundation with the aim to facilitate the complete mapping of the ocean floor by the year 2030.

Seabed 2030 will compile all available and newly collected bathymetric data into a high-quality, high-resolution digital model of the world ocean floor.

Its Global Center, which is responsible for centralised data management and products, is based at the UK National Oceanography Center, Southampton.

Gebco published an initial bathymetric chart of the ocean floor in 2014 (see top photo). In the light blue areas the sea is less than 200 m deep. In the dark blue areas the depth is over 7,000 m. Some 80 percent of the coean floor needs to be mapped more detailled.

This news item was originally published on the website of Furgo.

David Millar of Fugro advocated the private sector to take a strong role in Seabed 2030 at the Oceans 2017 conference in Alaska in September last year.