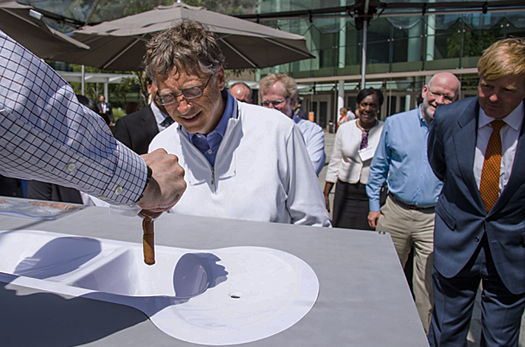 Bill Gates (centre) accompanied by the Dutch crown prince Willem-Alexander (right) toured the toilet displays during the Reinventing the toilet fair in Seattle on August 14th.

Invited by the Bill & Melinda Gates Foundation, research teams from around the world gathered to present high-concept toilet technology for the developing world.

New affordable dry toilets
One year ago, the foundation issued a challenge to universities to design toilets that can capture and process human waste without piped water, sewer or electrical connections, and transform human waste into useful resources, such as energy and water, at an affordable price.

Winner solar powered toilet
On the occasion Gates announced the winners of the Reinvent the Toilet Challenge. California Institute of Technology in the United States received the 100,000 dollar first prize for designing a solar-powered toilet that generates hydrogen and electricity.

Stimulate investment in sanitation sector
"Imagine what’s possible if we continue to collaborate, stimulate new investment in this sector, and apply our ingenuity in the years ahead," said Gates. "Many of these innovations will not only revolutionize sanitation in the developing world, but also help transform our dependence on traditional flush toilets in wealthy nations."

Gates added: "All the participants are united by a common desire to create a better world – a world where no child dies needlessly from a lack of safe sanitation and where all people can live healthy, dignified lives."

Complex challenge including cultural values
Chairman of the UN SG's Advisory Board on Water and Sanitation (UNSGAB), the Crown Prince Willem-Alexander of the Netherlands praised the new santitation systems but warned that solving the sanitation crises is not just a technological challenge.

"Sanitation is a deeply complex challenge where cultural values, social mores, political priorities, and development objectives are tangled together. Innovative technology by itself is unlikely to be enough to instill lasting change. To be a true success, these innovative toilets will have to effectively engage with this complex dynamic", said the UNSGAB-chairman at the fair.

Development of prototypes at eight universities
In 2011 the Bill Gates Foundation granted 3 million dollar to support eight universities across Africa, Asia, Europe, and North America in the challenge to reinvent the toilet as a stand-alone unit without piped-in water, a sewer connection, or outside electricity—all for less than 5 cents a day.

Dutch prototype based on microwave technology 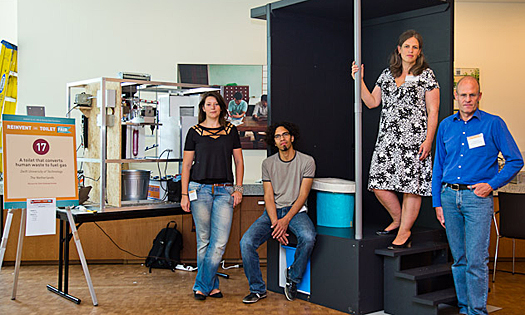 A Dutch delegation of the Delft University of Technology showed their prototype of a new sanitation system based on microwave technology. The system applies microwave technology to transform human waste into electricity. The waste will be gasified using a microwave-induced plasma. This process will yield synthesis gas (syngas), a mixture of carbon monoxide and hydrogen. The syngas will then be fed to a solid oxide fuel-cell to generate electricity.

Read the blog by Bill Gates on the website Impatientoptimists:
Inventing a Toilet for the 21st Century