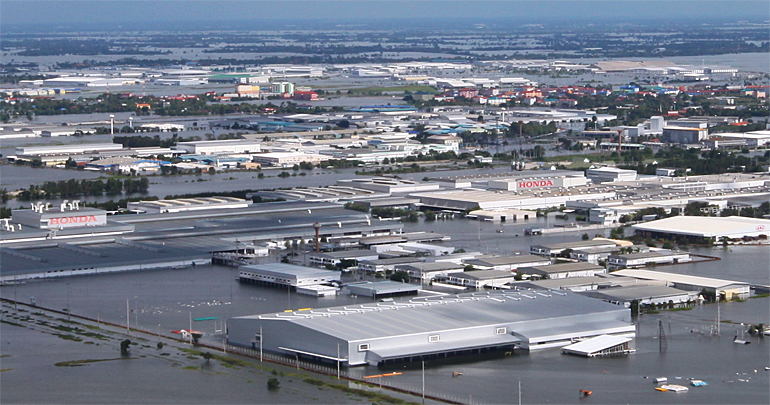 The outcomes were recently published by the Dutch DNB National Bank, following the first ever International Climate Risk Conference for Supervisors held in Amsterdam on 6 April. 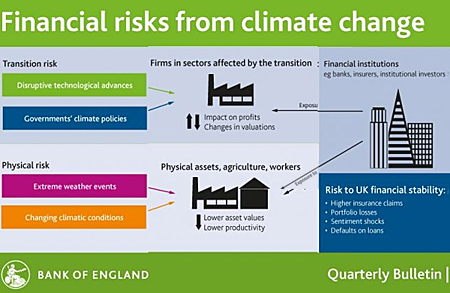 Scheme of the financial risks as seen by the Bank of Engeland in their Quarterly bulltine in 2017.

Trillions at risk
The final report of the Climate Risk Working Group quotes the Economist Intelligence Unit that estimates the total value at risk, as a result of climate change, to the total global stock of manageable assets as ranging from 4.2 trillion to 4.3 trillion US dollar between now and the end of the century.

Despite the fact that empirical evidence for climate change is overwhelming, markets do not seem to price in the risk, the DNB report warns.

A survey among 28 financial institutions, conducted by DNB, revealed a near universal consensus that climate-related transition risks are currently not adequately priced into the market.

Reasons are the complexity, lack of data, regulatory uncertainty and manifestation beyond a five-year horizon.

The potential impact of climate change became very visual in Thailand when over 10,000 companies were flooded in 2011 (on top photo), impacting the computer and car industries in Japan and USA due to reduced supply of parts. 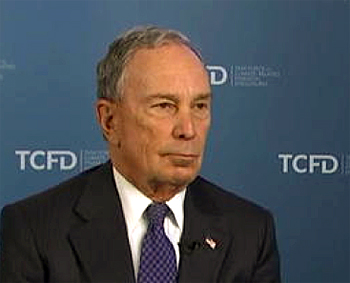 Chair Michael Bloomberg presented the recommendations of the Task Force on Climate-related Financial Disclosures (TCFD) at the G20 in Hamburg in July last year.

Data framework
Investors, lenders and insurance underwriters need better information on the assessment and pricing of climate-related risks and opportunities.

The working group advised to set up a framework under the umbrella of the G20’s Task Force on Climate-Related Financial Disclosures (TCFD), an industry-led initiative created to develop a set of recommendations for voluntary climate-related financial disclosures

More transparency
In its reaction on the report, the Dutch-based Global Centre of Excellence on Climate Adaptation (GCECA) emphasized the call for more financial transparency from companies on their climate-related risks.

The climate adaptation centre wants to play a key role in bringing this forward and to accelerate implementation of adaptation action.

Together with the European Bank for Reconstruction and Development (EBRD), the centre organizes a – invitation only - conference for the international financial sector on 'Advancing TCFD guidance on physical climate risk & opportunities' on 31 May in London.
About GCECA

The Global Centre of Excellence on Climate Adaptation focuses its activities on those areas where acceleration is most needed, and where this is complementary to the work of others. It is an independent organisation, working across the Global North and South, with offices in the Netherlands.

GCECA was initiated by UN Environment and the governments of the Netherlands, Japan and the Philippines and has established partnerships with with global organisations, NGOs, governments, financial institutions knowledge institutions and businesses to accelerate climate adaptation.