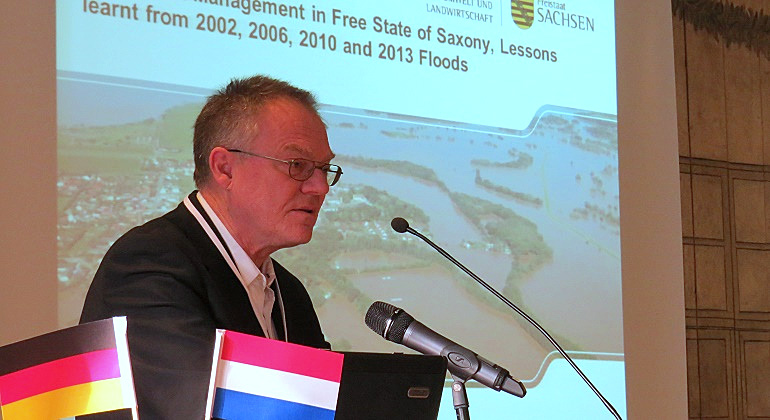 Both in Germany and the Netherlands flood mitigation measures are implemented quicker when residents are involved right from the start. At a special organised flood seminar it proved that in both countries such an early citizen’s involvement is crucial for the continuation of flood protection schemes. Or as David van Raalten of Dutch consultancy firm Arcadis called it: ‘we need less decide-announce-defend and we need more meet-understand-modify’.

The seminar took place in Grimma, Germany on 9 February on occasion of the Dutch trade mission to East Germany.

Strategic gap
Professor dr. Martin Socher (on top photo), Saxon State ministry of the environment and agriculture, shared his experiences on the flood protection measures that have been taken, following the big floods of the Elbe river in 2002, 2010 and 2013. “Our state was under great pressure to act quickly and we listed 1,600 measures to minimize the potential damage of new floods”, he told.

According to Socher, the implementation of some measures started immediately but others were heavily delayed. “Soon we faced a drop in the number of projects and we were criticised for this delay”.

Socher called this the strategical gap. “No reconstruction without a strategy”, he advised.

Voluntary fire brigade of Grimma demonstrates the closure of one of the floodgates to the German-Dutch participants of the seminar.

Two floods of the century
It was no coincident the seminar took place in Grimma. The city’s old town centre on the left bank of the Mulde river, a tributary of the Elbe, was completely flooded in 2002 and 2013. Grimma was hit by two 100-year flood events in eleven years.

A special commission draw up a scheme that foresaw in a 3 m high monolithic concrete wall. The residents heavily opposed the idea however, as they did not want to lose contact with the river. The scheme needed a full revision.

With a few years delay the scheme to protect that city centre from a 100-year flood event is now finished.

The new scheme has been integrated in the town planning and consists of new 2 km long structure made up of four large historic buildings of which the walls have been retrofitted as main elements of the flood defence structure. In between these buildings, various 1,3 m high concrete walls have been constructed, as well as 78 mobile closures, including mobile defences and hinged gates. 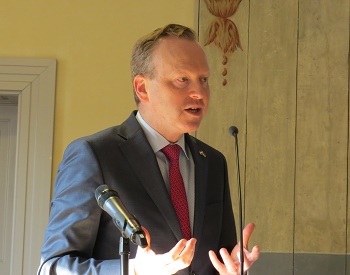 Deputy director general for Water and Spatial Planning at the Dutch Ministry of Infrastructure and the Environment Roald Lapperre summarized his lessons from the Dutch Room for the River programme.

Clear goal
At the flood seminar Deputy director general for Water and spatial planning at the Dutch Ministry of infrastructure and the environment, Roald Lapperre summarized his lessons from the Dutch Room for the River programme to increase the discharge capacity of the Rhine river.

The programme started in 2005 and includes over 30 measures. The last two are now under construction.

“It is important to have a clear goal”, said Lapperre. “It gives the reconstruction a focus. Furthermore, Lapperre mentioned the need to make good law and to have good governance with an adequate budget.

“Above all”, said Lapperre, “the Room for the River programme has shown that a flood prevention programme benefits from an integrated approach involving authorities at different levels and stakeholders, such as businesses and residents.”

“Bring out the best and improve your plans with their knowledge of the local situation and their interest. Include them in the planning phase and do not confront them with an almost finished plan”, was his advice. 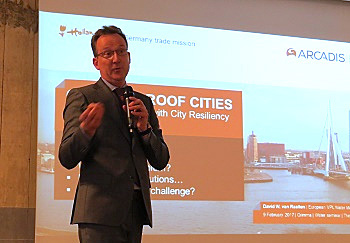 “It widens the perspectives and helps to prioritise the most urgent measures. It can also help to find more financial resources by engaging more stakeholders."

Van Raalten advocated to first meet the residents and involve them in the planning phase. “Let them advise you and modify your plans. Avoid you have to defend an almost final plan.”

He concluded with the call for more mum, less dad. “We need less decide-announce-defend and we need more meet-understand-modify”.