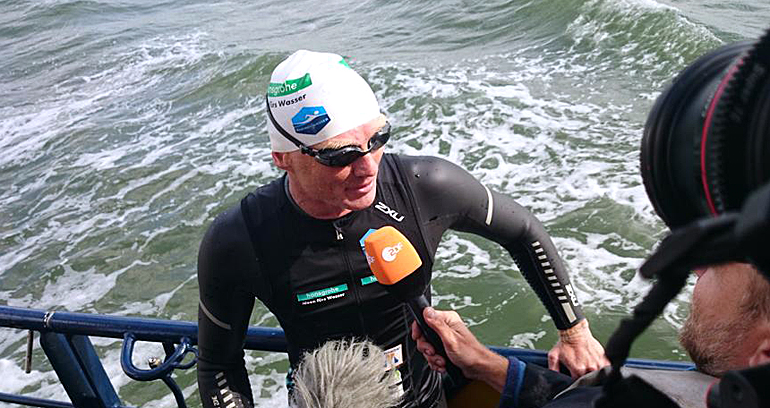 Fath started his marathon swim along the river Rhine in Toma Lake, the source of the river, in the Swiss Alps on 28 July.

So far only two other swimmers have managed to complete the Rhine swim from its source in Switserland to its mouth in the Netherlands. It took them 30 and 41 days.

With his 28 days, Fath is therefore the fastest swimmer to have completed the marathon. 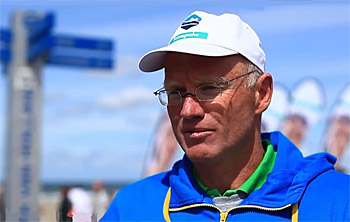 Hard work
"It was a great feeling to finally taste the salt water of the North Sea, "said Prof. Dr. Andreas Fath upon arrival at Hook of Holland. The last stages of his swimming marathon were hard work. "The river has really bput me to the test. "

During the last finale stages in the Netherlands, Fath suffered cold weather, much rain, head wind and an upset stomach.

Examining water quality
Along his Rhine swim Fath took water samples to examine the quality of the river water. "Crates full of water samples have been sent to the laboratory for analysis. So we will also put the Rhine to the test."

Furtwangen University will analyse the water samples, together with the project partners from Wetsus Institute (Leeuwarden/Netherlands), the Water Technology Center (Karlsruhe/Germany), the Alfred Wegener Institute (Helgoland/Germany), the Eawag (Dübendorf/Switzerland), of the University of Bayreuth and the Scienion AG (Berlin ).

Several hundred different substances will be analysed, using new analysis instruments such as a chip, which allows to monitor up to 150 microorganisms such as pathogens and biological indicators.

Additionally Fath monitored the water quality continuously with a special plastic membrane that was attached to his leg. "This allows us to make a very comprehensive inventory of water quality in the Rhine", the scientist assured.

The results will be presented on Hansgrohe Water Symposium in Schiltach, Germany on 13 November.