Global climate adaptation centre gets a floating office in Rotterdam, the Netherlands

The new Global Centre of Excellence on Climate Adaptation will be accommodated in Rotterdam and Groningen in the Netherlands.

These two cities have reeled in the Global Centre of Excellence on Climate Adaptation (GCECA) by jointly submitting the most convincing bid. 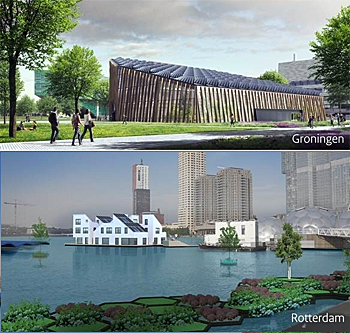 Forseen location of the two GCECA-offices in the Netherlands.

Effects of global warming
On the occasion of the announcement of the office locations, Dutch Environment Minister Dijksma said: ‘With this global climate centre, the Netherlands shows that it commands the knowledge and expertise to tackle the impact of climate change. And it is good news for Rotterdam and Groningen: such an institute will firmly enhance their position on the world map.’

Dijksma reminded of the severe impacts of global warming and mentioned the need to respond. ‘Global warming is bound to hit increasingly more people hard. Our initiative for this global climate centre will assist countries and organisations that are looking for tangible solutions to adapt to climate change.’

In Groningen, the GCECA will be accommodated in the innovative, sustainable Energy Academy Europe office building. With its university and businesses already actively engaged in climate, the city offers a perfect seed-bed for the climate centre.

Worldwide network
In February, a working group has started to set up the GCECA that will liaise with a broad-based, worldwide network of partners, among which international knowledge institutes, businesses, interest organisations, local and national governments, and the financial sector.

The official launch of the centre will be at the climate summit COP23 in Bonn, Germany in November.

In 2018, the GCECA will eventually expand to twenty staff members.