Contractor Boskalis started the construction of four new islands of the Marker Wadden archipelago, the Netherlands, on 8 March.

The islands are constructed on behalf of nature conservation organisation Natuurmonumenten and national department of public works Rijkswaterstaat, and are expected to be ready by 2018.

The ceremony to mark the official start of the expansion took place on the first island that was completed in September last year. 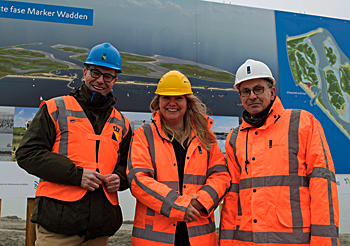 The expansion was officially marked by Dutch minister Melanie Schultz van Haegen (middle) who revealed a large impression of the archipelago as it will look like by 2020. (photo: Marten van Dijl)

Public-private partnership
The construction of the four new islands in the shallow IJssel lake, one of the largest fresh water lakes in Europe, is financed by public and private organisations. Together they raised 38 million euro for this new phase of the development of the archipelago.

By 2020 the whole archipelago is expected to be ready, covering 1000 ha of land, marshes and mud plains.

Natural sedimentation
The construction is a show case of the concept of Building with Nature. Boskalis will only construct some dams. These dams are placed in such a way it traps sediment.

As the silt sediment accumulates, the predesignated areas will be filled slowly, creating land, marsches and mud plates.

These dams will trap the silt sediment of the lake that is essentially too soft for building an island.

Water quality
The archipelago will form a unique ecosystem that will boost the biodiversity and increase the water quality of the lake.

Moreover, the lake will become more attractive for water sports and nature lovers. The nature islands of the Marker Wadden will be accessible to the public.

Video on how contractor Boskalis constructed the first island with fine silt.