The Dutch ministry of Infrastructure and Environment has given its public work department, Rijkswaterstaat, the go-ahead for a comprehensive package of measures to be able to store some 200 million cubic meter flood water from the rivers Rhine and Meuse in lake Volkerak.

On the rare occasion of a high tide on the North Sea in combination with high discharges on the rivers Rhine and Meuse, Rijkswaterstaat can - when the project is finished - temporarily store flood water in lake Volkerak, dropping the water levels on the rivers with 0,5 m.

This event has a possible occurrence of once in 1,400 years.

Rijkswaterstaat can now start redesigning the dikes and sluices in and around the lake and as off 2016 lake Volkerak is expected to be ready for use.

Therefore the revetments of many dikes have to be renewed and the stability to be improved.

Some locks have to be renewed and mobile pumps are needed to pump out the additional seepage water behind the dikes. 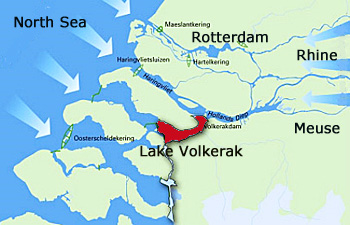 In case of high tide on the North Sea (left) in combination with a high river discharge (right) lake Volkerak (red) can be used to store flood water.

As an effect the flood levels will lowered and the dikes along the Rhine need not to be raised.

The Room for the River programme has two objectives. It raises the flood protection but the projects will improve the spatial quality as well, making the river also economic and environmental more vital.

Corporate clip of the programme Room for the River, explaining the objectives and the 30 projects along the river Rhine.