The Rhine-Meuse Delta in the Netherlands is often compared to the Sacramento-San Joaquin Delta, for its hydrodynamic complexity, diverse ecology and economic importance.

Comparative analyses
Now, two Dutch graduate students are visiting the California Delta to conduct an intensive pair of comparative analyses of the two estuaries with the hope that the scientific understanding gained here will further the comprehension of both.

"That’s one of the advantages of these kinds of exchanges," said Delta Stewardship Council Chair Phil Isenberg, who was instrumental in starting the exchange program after a visit to the Netherlands in 2009. "To get information from a different perspective on what we are doing could be enormously helpful."

Kick off three month study
Tjalling Vlieg and Toon van den Heuvel, both graduate students in Wageningen University in the Netherlands, appeared before the Council to kick off their three-month study visit of our Delta.

Flood management and environment
Vlieg is doing a comparative analysis on adaptive management for flood management of our estuary, while van den Heuvel is conducting a study of nutrient enrichment in the Delta, particularly the effect of ammonia on the ecosystem.

Both studies will assist in the identification of best available science that is critical in the development and implementation of the Delta Plan.

The Delta Science Program will be hosting the graduate students between April 23 and the third week of July.

Much more in-depth relation
"I think this opportunity of gaining understanding and experiences from around the world on these large systems is just phenomenal," said Council Lead Scientist Peter Goodwin. "I think we should acknowledge Chair Isenberg for having the vision to start this, which looks like the start of a much more in-depth relationship in the coming years."

Delta science program
The arrangement was born after an Isenberg visit to the Netherlands in 2009 for the International Conference on Delta and Coastal Development. In March 2010, Isenberg met with the Dutch Consul General in San Francisco and proposed the idea of the Council hosting Dutch graduate students interested in water policy.

The Delta Science Program is coordinating Vlieg and van den Heuvel’s research and stay in California with Peter Wijsman of Arcadis. Wijsman is himself a former visiting Dutch student to the CALFED Bay-Delta Program, and he now represents the International Delta Alliance in California.

To learn more about the Delta Science Program, click - here - . 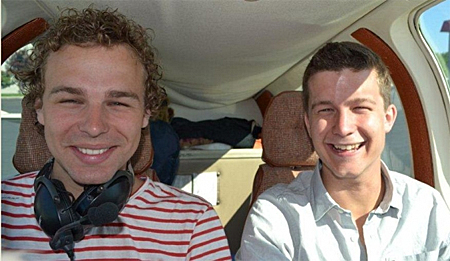 More about Tjalling Vlieg and Toon van den Heuvel
Tjalling Vlieg
Vlieg holds a bachelor’s degree in Integrated Water Management from Wageningen University, Netherlands. He is currently a graduate student there working on his Master of Science degree in International Land and Water Management. Tjalling has proposed a thesis titled “The implementation of Adaptive Management for flood management in the Sacramento-San Joaquin Delta and the Rhine-Meuse Delta.” He aims to compare adaptive management in concept and practice between the two Deltas. Tjalling will be guided primarily by DSC staff Chris Enright and Lindsay Correa while in California. He intends to interview at least 12 experts from policy, practitioner, science and stakeholder backgrounds.

Toon van den Heuvel
Van den Heuvel holds a degree in Chemical Engineering from Wageningen University, Netherlands. He is now a graduate student there working on a Master of Science in Environmental Science. His proposed research is titled 'Nutrient enrichment of the Sacramento/San Joaquin Delta: Pelagic organism decline and algal blooms'. He aims to understand the relative importance of the various sources of ammonia to the Delta to the pelagic organism decline and interactions with other stressors. Toon will be guided primarily by DSC staff Sam Harader and Anke Mueller-Solger while in California.

This news item was originally published on the website of the
Delta Stewardship Council
.