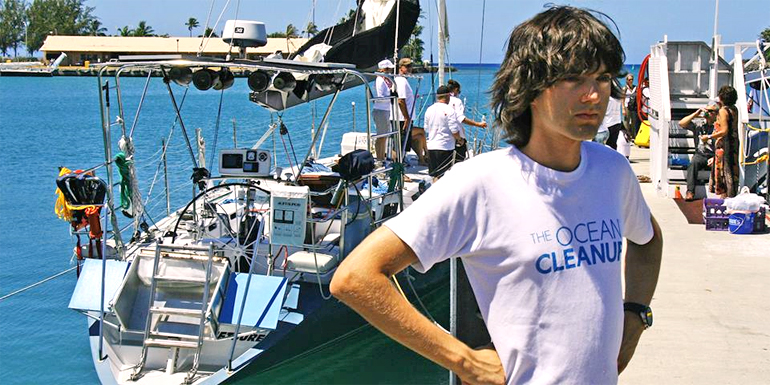 Most of the Mega Expedition sailing yachts has now left Honolulu, Hawaii. Some 30 vessels embarked on a 30 day voyage through the Great Pacific Garbage Patch.

The expedition's goal is to find out how much plastic is floating in the ocean, in preparation for its cleanup by 2020.

The expedition is initiated by Ocean Cleanup CEO and founder Boyan Slat (on top photo). It is the largest research effort ever to assess the amount of harmful plastic pollution in oceans. 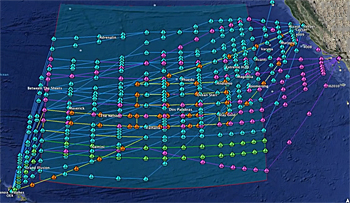 The yachts will take samples at preselected positions, while sailing from Honolulu (left) to California (right)..

Sampling small debris
The sailing yachts that participate in the expedition are on their way back to California en route from the Trans Pacific yacht race that took them from Los Angles to Honolulu two weeks earlier.

The yachts drag a surface trawler that catches small plastic debris. It is the standard scientific equipment used around the world to quantify plastic pollution levels.

Serving as the fleet’s mothership is the 171 feet research vessel Ocean Starr. This former NOAA vessel has been especially fitted with an aerial camera system and giant nets to study large objects, such as ghost nets and tsunami debris.

The fleet will be covering a 1.4 million square mile area between Hawaii and the US West Coast, creating the first high-resolution map of plastic in the Pacific. 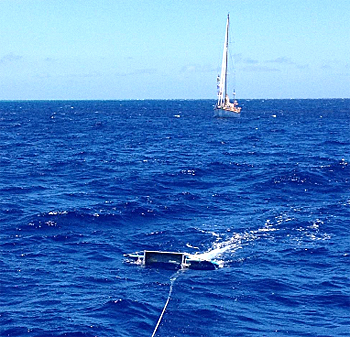 All yachts tug a surface trawler that is used to collect bargage for standard periods of six hours.

About Ocean Cleanup project
The Ocean Cleanup and its founder Boyan Slat is a private initiative to fight oceanic plastic pollution by initiating the largest cleanup in history.

Slat has invented a method with the mission of cleaning up the Great Pacific Garbage Patch.

While working on a school project, 16-year-old Slat started studying oceanic plastic pollution and the problems in cleaning it up. He came up with his passive clean-up concept and in 2013 started The Ocean Cleanup foundation.

A team involving 100 volunteer scientists and engineers spent a year carrying out a feasibility study, which was published in June 2014. It concluded that the passive system was likely to be a workable and cost-effective method to remove almost half the Great Pacific Garbage Patch within 10 years.

The Mega Expedition can be followed on the websites of Ocean Cleanup and American Sailing Association.