Groasis offers a recyclable Greenboxx to users from all over the world, to grow plants in dry areas. The Greenboxx is the new environmental friendly version of the very successful Waterboxx.

Groasis offers the free copies to 600 users to test the plant box and share their experiences.

Special water collection
The company brings the Greenboxx on the market to grow trees and plants in extreme dry conditions. The box is based on the plastic Waterboxx version that collects water from rain and night time condensation in a reservoir.

The water is gradually released - around 50 ml per day - into the ground by a wick that stimulates the plant to develop a root structure. The box acts as a shield for the water in the upper ground and limits evaporation.

All over the world
Groasis has installed the inexpensive, easy-to-use Waterboxx in many different countries, mainly to grow trees to combat desertification in arid regions.

The newly launched Greenboxx version is made from recycled paper. It helps the plant at the start. Then the Greenboxx will degrade and function as a nutrient. 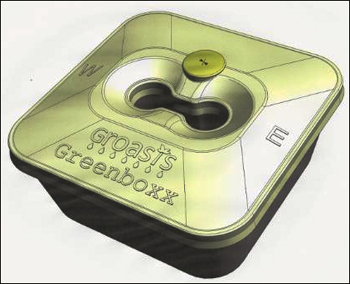 The paper made Greenboxx version.

Seeking testers
Groasis invites people and organizations to subscribe to its website in order to help test their latest invention. The company was inspired to use the crowd sourcing method after seeing the success of the Google Glass. By using a crowd sourcing model many companies and persons were able to test its function in order to improve its use.

With the Greenboxx, Groasis uses the same method in order to improve its function and thereby create a directly applicable, logical and practical solution to some of the most pressing environmental issues of our age.

Pieter Hoff, social entrepreneur and founder of Groasis: "With the Greenboxx we introduce an unimaginably easy tool to combat erosion through reforestation of manmade deserts without using irrigation. I hope thousands will subscribe on our website to help us test and improve the Greenboxx in order to reach our objective to reforest the world."