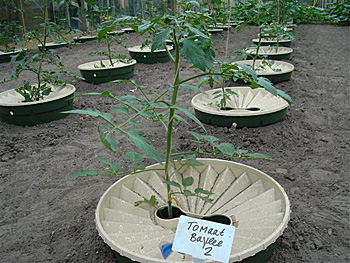 On May 1 the Dutch company AquaPro Holland started an experiment and planted seven types of vegetables in a Groasis Waterboxx with three wicks. The objective was to know exactly how much water the plants use and how much vegetables they produce. In order to prevent water from entering the box through rain or condensation, the experiment is conducted in a greenhouse. The greenhouse is not protected against sun so temperatures could get high.

Who it works
The Groasis Waterboxx is a kind of bucket with a cover with two holes in it to catch rainwater and produce and catch water from condensation, and in the centre opening a plant can grow. Once captured, the water functions as a means of keeping the temperature low below the box and the centre opening creates a nice micro-climate. A wick drips about 50cc of water to the plant every day, which is enough for it not to die, but not enough for it to grow properly. In this way, the plant is challenged to develop its taproots to find water itself. 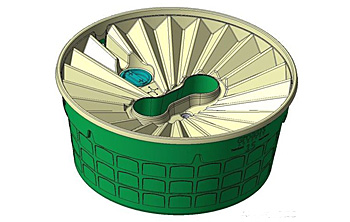 Best innovation – Populat Science 2010
In November 2010 Popular Science organized the 4th Annual election of the 'Best of what´s New' innovation. This competition found place between 117 fantastic products of Fortune 500 companies, including the iPad from Apple and the Ledlamp from Philips. The Groasis waterboxx won the Green Tech Award (category sustainable inventions) and also won the 'Best of all' award.